Famous with his Twitter handle of ‘rubydrummr,’ a man cycled for over 2,500 miles in the United States. He started his journey from the Poo Poo point and his final destination was the Pee Pee Creek. He covered a total distance of around 5,000 miles. 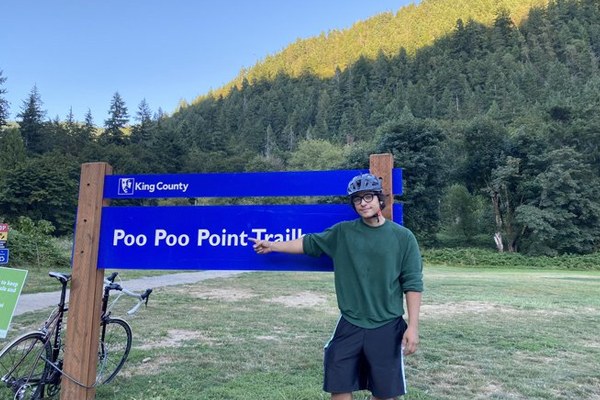 His motive behind this long journey was to raise awareness about the Yemen crisis which is considered to be the largest humanitarian crisis in the world. His journey from number two in the west to number one in the east took him a total of 36 days. The entire 2,553 miles from Poo Poo Point Trail in Washington to the Pee Pee Creek in Ohio took him to travel across nine states between the two points.

As onerous as this bike ride sounds, he had to cycle 69 miles every single day in order to reach his destination. He didn’t travel even a single mile less or more than those predetermined miles for all the days. On reaching the creek in the east, he poured out his heart to his followers on Twitter. He wrote how he had mixed feelings with happy tears running down his face which then made him laugh about crying.

This tweet of his had gained thousands of likes and about 50,000 retweets. To this, he told his followers that he was delighted because of all their appreciation. He further assured them about sharing his experiences from the trip whenever he got the time to do so. On his way, he also passed some remarkable sites and places. One of such locations was the Sharts Road, about which he later tweeted writing how he forgot that he had passed the same and won’t be able to make up for it.

I can’t believe I did it. Over 2500 miles on a bicycle, 36 days 😩 LMFAO pic.twitter.com/gDGmiDUUTi

He had also uploaded a picture of his bike and told his followers how triathlon bikes aren’t the best ones for such a long trip. Continuing in the context of his bike, he wrote that broke boys have to work with whatever they have and that he’s acquainted about his wild budget setup. He further added that because he isn’t a cyclist but just a determined yet impecunious traveler, he used whatever bike he had.

In one of his fresh posts, he told the people that for at least 32 out of the total 36 days, he had to tent out. He further asked of the people living between Ohio and Maine to message him if any of them was willing to help him by providing him with a place to sleep. For the cause with which this man took this journey, let’s hope there are enough kind people like him to offer their shelters to him.