There is nothing unusual in finding neighbors fighting over trivial issues. More often than not, parking space remains the issue of dispute between neighbors. This man instead of fighting with his neighbor decided to prank her by wrapping her car with black plastic after she parks her car in his parking space. 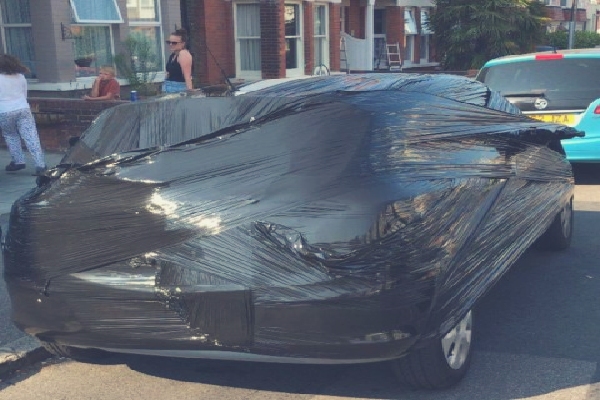 A 49-year-old man, Tobe Bailey was facing trouble from his neighbors as they were parking across his driveway for a while now. When he found his neighbor’s, car parked in his space, he decided to take matters in his own hands by teaching (maintain tense) her a lesson.

Bailey lives in a street where there are 26 houses and 24 parking spaces. Tobe and his wife spent about $2500 to put a dropped curb in 2019 and clear signs telling people not to park there but people continued to do it all the time. They are blocked by someone or the other at least two or three times a week.

One day, when he came back home and found his space taken and his daughter’s car blocked in as well, he decided to teach his neighbor a lesson.

At first, he wrote a note and stuck it on the windscreen, telling the owner to move it. He opened a can of beer and sat on the balcony and waited. He checked the next morning to see if anybody responded or not and then decided to smash the message home.

He just had a load of pallet wrap delivered, so he wrapped it across the car. On seeing this, the owner of the car soon came out. It was a young girl who had just moved in next door to Tobe. She was very apologetic and said that she was sorry and would not park in his space again.

Tobe later revealed that he likes to get his point across funnily and harmlessly and he is not doing it to be evil at all. In Tobe’s words, “It only took her a few minutes to take the wrap off and her car was cleaner after because of it.” Tobe’s wife and four of his children found his prank hilarious.

This isn’t the first time; Tobe has pulled such a hilarious prank on a person who parked in his space.

When the man came back, he got in the car and started it but could not drive anywhere. The man ultimately had to knock on his door and apologize. He then never parked there.