Who knows you better than your parents? Nobody, right? Well, that is the reason they know how to get you out of your comfort zones. This dad knew the perfect revenge when his daughter was away from home for one whole weekend without informing the parents. 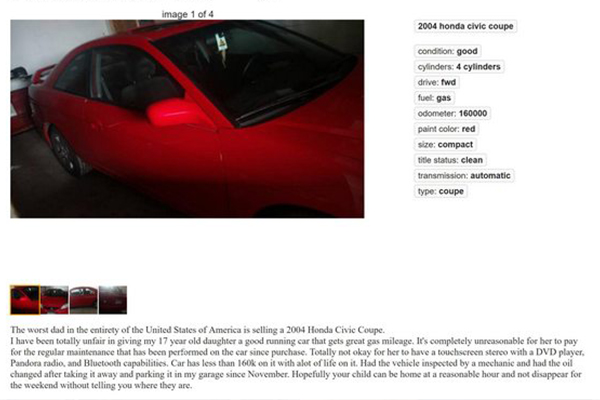 Long gone are the days when the parents could just ground their kids and punish them for the bad deeds they did. The case is different now; children are way more rebellious these days, so if you ground them, that means they are going to take advantage of your absence and still do what they want to.

A smart dad knew the right way to take revenge from his daughter who didn’t care to inform or say anything when she disappeared for a weekend. Involving Craigslist is serious but so is the situation when you don’t know the whereabouts of your kids for more than 48 hours. Also, if your kid has done that, you would want to lock them in a room and not let them come out whatsoever.

But has any parent thought of selling off their children’s belongings while they are away?
This dad believes it is his carelessness that has made the situation worse. Hence, he decided to sell off his daughter’s car – 2004 Honda Civic Coupe.

He said, “I have been totally unfair in giving my 17-year-old a good running car that gets great mileage. It’s completely unreasonable for her to pay for the regular maintenance that has been performed on the car since purchase. Totally not okay for her to have a touchscreen stereo with a DVD player, Pandora radio, and Bluetooth capabilities.”

The car is in great condition and has a lot of life to itself. It seems like a fair game because no kid should be leaving you waiting for a weekend, not at such a young age at least.