Despite being called a ‘whale’ and a ‘cow’ by trolls, this plus size woman continues to preach body confidence and says that being overweight does not mean settling for any man instead she has plenty of options. 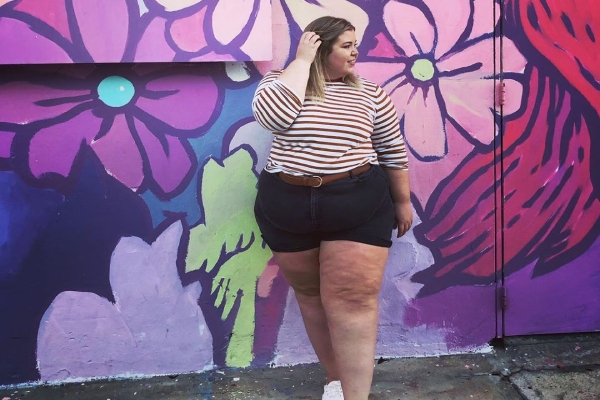 In her teenage years, Teacher Megan Fisher began to convince herself that the only way to be happy was to lose weight. She was a victim of low self-esteem.

While growing up in Pennsylvania, USA, she tried countless fad diets. In her teen years and early twenties, she starved herself just to lose a few pounds. Her weight-loss diets included Keto, Atkins, Isagenix, and Paleo.

29-year-old Megan describes her life to be dull before moving to New York City. She said that she had an unhappy relationship with her boyfriend, and a miserable job of a bank cashier making low wages. She was so self-conscious about her body that she was afraid and unmotivated to make any changes in her life.

But Megan found a ray of hope when she discovered Tess Holliday in January 2014 while she was going through pre-op preparation for a gastric bypass – just two weeks prior to the scheduled surgery. The body-positive movement gave her the courage to cancel the surgery.

Megan realized that her weight doesn’t matter, and her UK size 26 and 21st 6lb body can also make her feel confident. Soon after, she left everything aside and made a big decision of moving to NYC.

This move changed her life, albeit being the scariest thing she has ever done in her life. She learned to be independent and eventually found out that there is no need to settle for any man.

Fisher said, “I first went to the beach in my bikini with my family on a small lake so it was kind of a stepping stone to being at a large public beach. The first time I did that, it felt freeing. I got some stares, but I was so happy that I didn’t care why they were staring at me”.

Megan mentioned that she never had plus-size role models while she was growing up who could inspire her to celebrate her current body. She showed her gratitude towards Tess, who helped her in her journey, and now her goal is to be that role model she needed when she was young.

Megan now feels confident in showing off her body, wearing bikinis, crop tops, and shorts; inspiring other plus-size women to get rid of body insecurities. She has over 11K followers on Instagram where she shares her body-positive pictures.

But social media is not always supportive. She has been targeted by some cruel trolls that labeled her a ‘cow’, ‘whale’, criticized her for promoting obesity, and told her that she was going to die early. But this positive woman unapologetically continues to share snaps of her best life, which includes her travel life and her experience as a plus-size girl. She has one simple explanation for everyone – If you ‘don’t like it’, you can simply ‘look away’.

The influencer explained, “If it makes you happy, then go for it. You truly cannot make everyone happy, even if you’re wearing a large paper bag hiding all of your curves, so why not wear something that makes you feel amazing”?

Megan advices, “if someone isn’t paying your bills, then they get no say over what you do with your life”.