Haircuts are always tricky. One gets tempted for doing it themselves but they should go with the professionals to save themselves from embarrassment. A woman decided to chop her adorable Yorkshire Terrier, Mano’s hair herself, and immediately regretted her decision. 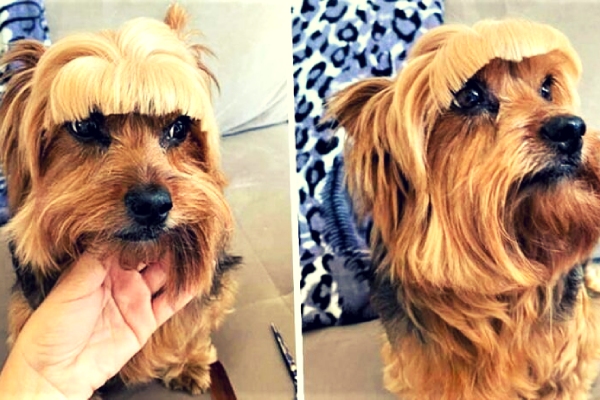 The woman, Susana Soares was a resident of Blumenau, Santa Catarina, Brazil. She expected to do a good job on the chopping of fur as she had spent years training her skill. She was a hairdresser by trade. Anyhow, it turned out that giving humans a haircut was way different than giving it to dogs.

Mano had not been to the groomers for a long time and as a result, his hair started to block his vision. Susana decided to help her dog and took the matter in her own hands. She took out the hairdressing scissors and started cutting some of the furs to help her boy out. Though, the result was not good. She ended up giving a ‘Karen haircut’ to her boy. Thankfully, Mano did not decide to complain to anyone about the service he had received.

Mano’s fringe did not look good on his fluffy face but might have looked good on a human’s face. While speaking to ‘The Dodo’, Susana said that she ‘fell on the floor laughing’ after seeing her work on her boy.

Mano liked his new look as now he was not facing any problems looking around. Susana probably learned her lesson and will not be popping Mano back on the hairdresser’s chair any time soon.

One always wants their dog to look nice, after all, it’s not just a dog; it’s their child. Naturally, they want their child to always look good. Likewise, Susana wanted to give a nice look to Mano and no one can blame her for wanting to do it. Susana thought she had the skills to give Mano the perfect haircut but did not succeed in it. Though, she should receive appreciation as she accepted her fault and didn’t ignore the fact of the bizarre haircut.

She instead made a promise to herself that she won’t try to trim Mano’s hair herself ever again.