A YouTube star named Anas Marwah set the social media world on fire by celebrating his due baby’s gender extravagantly. The star along with his wife, daughter and family members stood before the splendid Burj Khalifa (Dubai) as it shimmered in pink and blue hues. The countdown began, and it finally changed its color to blue to signal a boy. 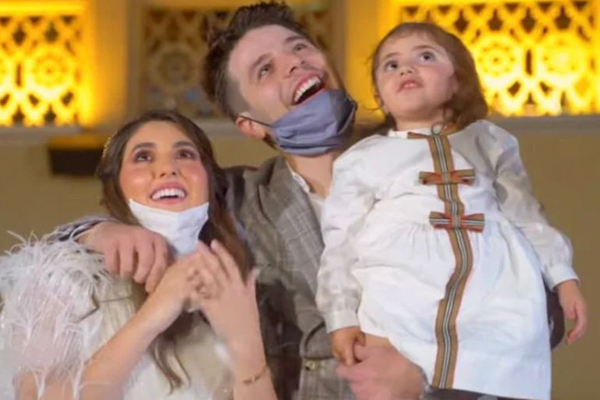 The social media world has evolved as a platform providing enough room for the creative souls to cultivate and rear their creativity and wit to a great extent. As a result, it continues to blossom in the aroma of thrilling and trending challenges and initiatives. Not just that, it has also provided an impetus to the unique way of celebrating moments for the bubbling souls around the world.

Adding to the trending euphoric tones, a YouTube star named Anas Marwah turned up in the social media world to share his pending bliss. Syrian-Canadian vlogger landed in glistening alleys of Dubai with his wife- Aayla, daughter Mila and other family members to reveal and celebrate the gender of his due baby. He arranged for a great light show at the iconic Burj Khalifa. The sky-touching building took up blue and pink hues as the family lined before it to brace up for the moment. They began the countdown.

As they counted to zero, the towering structure (829.8m with 163 floors) glistened in blue to signal a boy for the couple. The blessed family members jumped with joy. Meanwhile, the couple thanked everyone on the auspicious occasion.

Well, they did not keep the bash confine to the Burj Khalifa. But a video capturing the whole show too landed in the social media world to drive the netizens crazy with the party hues. The pictures of the grand celebrations surfaced in every pocket to make everyone go gaga over it.

Anas captioned the video, “We love you! ITS A BOY”. And, his fans could not hold themselves back from pouring out their good wishes and prayers for the couple. Soon, there was a spate of congratulatory messages for the soon-to-be parents.

However, the thrill did not last long. Many users turned up to denigrate couple’s move. They ridiculed them for draining their money, around £74,455 (350,000 United Arab Emirates Dirham), and time in putting up a lavish gender reveal show.

One of the critics commented, “More on the nauseating ridiculousness of gender reveals, I give you this 350,000 Dhms ~ 100K USD gender reveal in Dubai. I am ashamed for them, but it seems they have no shame. I pity the children…”

Another user joined the chorus by commenting, “This Arab couple paid $100,000 for a gender reveal to be revealed in Dubai’s famous buildings Burj Khalifa. How stupid are humans now a days? Instead of spending that much for 10 seconds of your time, could have used that money to donate to the Middle East”.

That was not the end of it. A third user popped in to say, “Someone did a gender reveal on the Burj Khalifa in Dubai. Cost 350 grand or so they say. Gammiest looking thing I’ve ever seen”.

Another user took the things higher by commenting, “I was gonna make a comment about that Burj Khalifa gender reveal but it’s so disgusting tone deaf and full of opportunists that I decided it wasn’t worth my energy”.

Thus, it ended up drawing the ire of social media users.

Hopefully, there would be pocket-friendly celebrations coming up!