It was an initially awkward but later emotional moment when a 4-year girl said something on black lives. In a store, a little girl because of her pure innocence saw a black woman and shouted, “Black lives matter”. It was well received by the woman and she was happy to see how the girl saw black people with strength. They later shared contacts and developed a good bond. 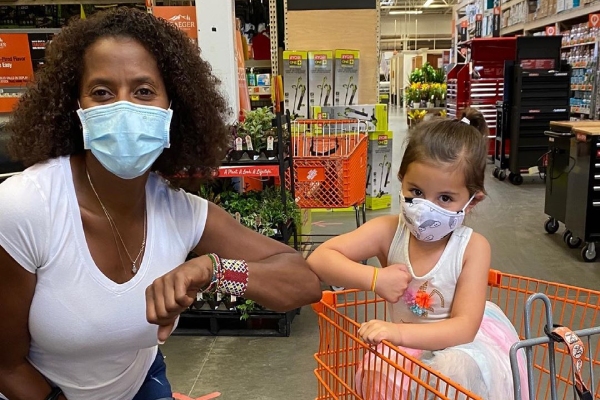 When we are born, we are born as human beings and not as blacks or whites. As we grow up, we keep on discriminating people around us on the basis of cast, color and creed. That comes as we start losing innocence. As kids, we are pure and our words are unfiltered and unbiased. It sometimes becomes awkward for parents to keep up with their children’s doings. But everyone understands that they are children and say anything out of just a pure heart.

Camryn, a 4-year-old girl, shouted “Black lives matter” to a woman at a depot. Cassie, her mother, got quite embarrassed owing to her daughter’s sudden reaction. It was something appreciable although awkward in the beginning. The black woman referring to whom the comment was made got awkward too for a few seconds. Later, she appreciated the sweet comment and was also grateful to child for having such a view. The black woman was really glad to know that a child had such good views for black people and even thanked her for it.

Today I was at HomeDepot shopping for flowers. I saw this woman and her beautiful daughter come in out the corner of my eye. After I past them, Cam, is her name. She yelled, “Black Lives Matter” I turned around looking for her and told her THANK YOU, WITH TEARS IN MY EYES. I asked her mom If I can take a picture with her. She noticed my Bronco necklace and told me she wants to be a Broncos cheerleader. I told her thank you again for being so kind. She, said “can I ask you a question?” I said, yes. She said, “can you come over for a sleepover” 🥰🥰❤️❤️❤️❤️ I’m going to arrange a play date with her❤️ Today was a good day. THE YOUTH IS GOING TO CHANGE THE WORLD🙏🏾

A post shared by Sherri Gonzales (@sherrisgirlsempowermentintl_) on Jun 30, 2020 at 5:14pm PDT

Sherri Gonzales, the black woman, initially did not know how to react to the statement. Sherri and Cassie shared an awkward gaze for a moment before they could know how to react. Sherri was although quite impressed with the girl. It was not just about the comment that she made. It was also about the amount of confidence and surety with which Camryn made the comment. That was what attracted Sherri the most. Sherri even posted about the same on social media. The incident helped her realize that youth has the power to change the world and bring such positive thoughts.

Sherri and Cassie shared a friendly conversation thereafter. Camryn’s mom noticed Sherri wearing a Denver Broncos necklace. Cassie told Sherri that Camryn aspires to be a Broncos cheerleader someday. Sherry was glad to know that and told Cassie that her son played for Denver Broncos and Chicago Bears for 10 years. Her son was D.J. Williams, a first-round picks for the Broncos back in 2004. After sharing such common interests and liking for each other, Camryn asked Sherri if she could come for a sleepover. That was certainly the cutest thing coming from a four-year-old.

Both the ladies shared their phone numbers and took to social media about their bonding. Days later, sherry was invited by Cassie for a garage sale. Cassie and her family wanted to donate all the funds generated to Sherri’s organization for women empowerment. The organization is nonprofit and started with a school and daycare center, providing clean water. Sherri was very thankful to the family for donating all the funds to her school in Kenya. She was really grateful to the little girl who understood her importance and what she does.