A man in the UK took the love for LEGOs to a different level when he covered his entire house with LEGO train tracks. He even went out of the way to set the scenery, custom tunnels, and many other things through which the train would pass. He posted a video of his whole journey of setting the LEGO train tracks and all the additional details on his own YouTube channel called Half-Asleep Chris. 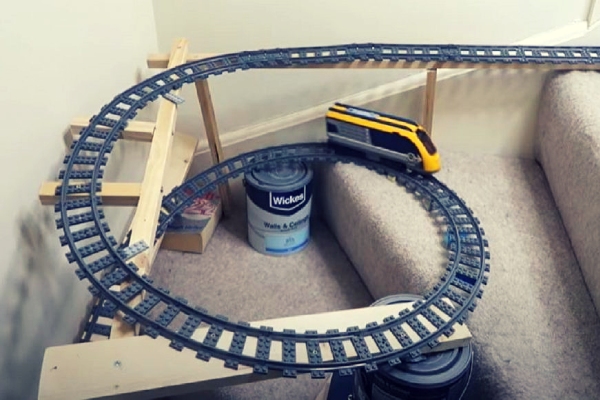 Everyone has got into new hobbies during the pandemic. Some of them had recreated theme park rides in their home and some engrossed the idea of playing board games. This guy decided to go after his childhood dream of owning a LEGO train set. Initially, it was just for fun and to pass time at home. He was disappointed by the classic LEGO train set and decided to do something big. It was just a matter of time when he became obsessed with the idea of filling his house with the LEGO train tracks as it was the only way to keep him sane during the lockdown.

This big project of the setting the train set in the entire house took fifty-three boxes of train tracks which meant that there were four hundred straight pieces, four hundred flexible pieces, and two hundred flexible pieces. It even had four-switch pieces. In his video, he mentioned some of the obstacles that came in the way of setting the train tracks.

The main obstacle was the stairs. He considered them as the Mount Everest of the house. He conquered this Mount Everest with his knowledge of mathematics. The obstacle about which he couldn’t do anything was his two cats, Ralph and Bella. Nonetheless, they were curious about all the extra things that were taking their space in the house and they were all up to destroy it.

The unique feature of the whole train set was the geodesic dome that he made. There was a rain forest inside the dome through which the train was supposed to pass. It was really cool and innovative. He used some real and fake plants to set up the rainforest. The cats were curious about the dome. They thought it was made for them and Ralph even ate some of the leaves.

Another cool feature of the train set was the underwater train track. He made a tunnel in his small backyard pool and set the train tracks inside the tunnel to give an underwater effect to the whole train journey. Along with the tunnel, he put a replica of the Golden Gate Bridge on the top of the pool. He even made a light tunnel with glow sticks in his bedroom which gave an awesome effect to the train journey. It took 87 glow sticks to cover a tunnel of around 8 meters.

The man set up the whole LEGO town in his office for the train to pass through. The town included a haunted house, a Disney castle, a Disney train station, and a treehouse. He even added some small figurines in his LEGO town which were pounded upon by his cats. In the end, all that was left was to put himself in the conductor’s seat. After all, it was his right to take a ride in the train set that he made all by himself with so much precision.