It is rightly quoted that an antique book show unearths hidden library treasures. But sometimes the treasure doesn’t lie on the library’s shelves but behind it. Something similar happened at Washington Library where the staff members found the treasure of trash dating back to the 1980s behind the shelves. 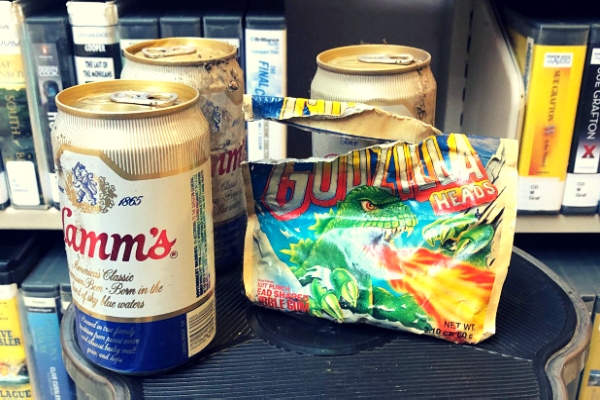 State library of Walla Walla, Washington was closed for the public since March because of the coronavirus pandemic. This allowed library staff members for cleaning and renovating bookshelves.
While moving and cleaning the mystery section, one of the staff members made an unusual discovery behind a 7-foot corner panel: an open pack of chewing gum and five full cans of Hamm’s beer dating back to the 1980s.

The City of Walla Walla then shared about the discovery on Facebook. The post read, “Along with the usual dust and dead bugs, he found five unopened cans of ‘the beer refreshing’ and some monstrously stale gum still in its vibrant packaging, along with a moldering paper bag.” The post further added that someone had a cue from ‘Treasure Island’ and stashed their loot behind the shelving which he failed to retrieve afterward.

The staff was able to figure out that the snacks have been there for 30 years by looking at the gum label- Godzilla heads which dates back to the 1980s. In addition to this, the beers lacked printed warning labels that have been required for alcohol since November 1988. All of this led the staff member to conclude that the goods were there for upward 30 years.

The staff members further supposed on their own that the trash was unintentionally abandoned, the original owner perhaps was too drunk to recall where he had put away the snacks.

Library director Erin Wells in an interview said, “It looked like somebody had just stashed it there and maybe thought they could get it later, but there was no way to get it out.” Furthermore, he added that there were probably six beers that the person bought and there were only five that the official found, so the person might not be thinking straight when he did it.

Wells shared that the library celebrated its 50th anniversary in its current building in July and that the institution has served the public for over 100 years.

Wells revealed that the COVID has been very challenging for the library. They had to shut down the building for the public in March and doing curbside pickup right now, but all of their staff are working in the building. One of the biggest challenges the library had to face was the budget. They had been asking for donations so that they can continue to buy library books.

Talking about the “artifacts”, Wells said that they were moved to another Walla Walla city facility: the local landfill.

“It’s probably not the outcome the trove owner expected; unfortunately, not every story has a happy ending,” the Facebook post concluded.