There are rarely any proposals that are not romantic and tend to end up in a disaster. However, when the latter happens, it is either hilarious or quite upsetting. But this one incident takes the top spot in the list of crazy proposals as a man falls in the water while proposing to his girlfriend on a boat. Well, the events turned out to be hysterical. 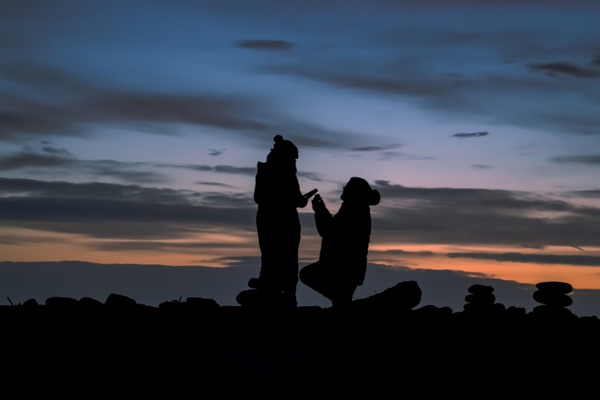 What all can go wrong during a romantic boat proposal? For starters, the ring escaping into the depths of the waters is quite possible. But if we think deeper, things can be worse.

This couple knows the worst that can happen as they have experienced it and their viral video tells the tales of their embarrassing proposal. The groom-to-be might have been planning this boat proposal for weeks but turns out he didn’t test the waters well!

Their proposal was being recorded but instead of the video being adorable and delightful, it turned out to be awkward and hilarious.

In the video, the guy on a parked boat can be seen walking towards his wife-to-be who was sitting on another boat close to him.

The man pulls that boat towards him and asks her the big question. They lean towards each other and hug after the bride-to-be says ‘yes’. Just then, the boat on which the woman stood speeds and moves forward at a high pace.

The sudden push makes the woman topple and her foot hit her partner who can be seen dramatically landing in the water. The people screamed as they witnessed the proposal turning into this!

The daughter of one of the woman’s friends uploaded the clip on TikTok and captioned it, “Proposal gone wrong.” She also wrote, “My mom’s friend got proposed to today and just wait for it…”

The video was viewed by millions of people and it then reached Twitter where comments started flooding in. “I’m not even lying. My cheeks hurt from laughing so hard. I wasn’t expecting that. The way she went flying and kicked him in the face,” one wrote.

Another comment read, “Love it!! I hope they have a beautiful wedding away from the water! Congrats!!!!”

“I expected him to drop the ring in the water. The actual result was soooo much better,” someone expressed.

People hoped that this couple shares beautiful years together wishing them a ‘long wonderful marriage’.

While one can plan a lot in advance of the proposal, no one knows how it will turn out on the day. This couple has one hysterical memory to cherish forever right before their wedding. Everyone needs something to laugh out loud after years of being together!