This unbelievably boring period of covid-19 lockdown has become a source of self-introspection and self-grooming for some of the people across the World. People, to avoid laziness and clumsiness, have started doing things which make them look alive. DIY haircuts, cooking, baking and tricky dance routines being some of the activities flourishing during this collapse. Amidst this boring time period, Morgan- a 28 year old mother from Oregon, US thought of an incredible way of amusing people. 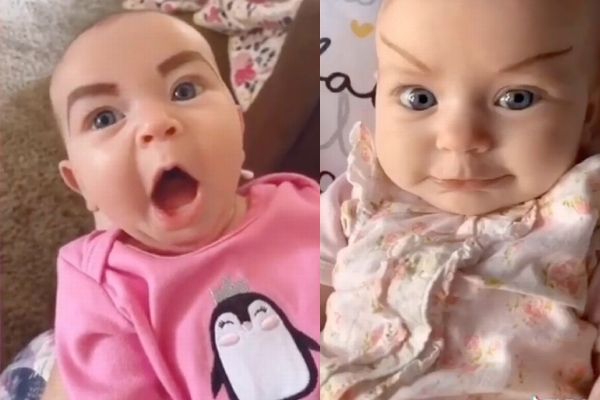 To overcome her boredom, Morgan thought of casting her beautiful little girl in a tiktok video. Out of everything interesting, she found drawing hilarious eyebrows on her daughter’s cute chubby face with a NYX professional makeup micro brow pencil in ash brown color. As a result, Leighton Mae Rose- the daughter, looked exceptionally funny.

She exclaimed that this idea came into her mind as she had witnessed similar sort of videos years ago. To have fun with her family, she thought it would be a great deal if she paired Rose’s cute and overwhelming expressions with those of comical brows. In addition to the family, it amused a whole load of people when she posted this hysterical video on her tiktok channel. She was convinced that tiktok is the “new trend”, so she posted the video on her channel.

Quarantine has surely made people use tiktok a lot much. She got such an amusing reaction from the audience that she decided to brighten up people’s day by adding two more videos of Rose. She looked totally hysterical in those “fancy” brows. Like an icing on the cake, her expressions were just astonishing. Morgan focused on entertaining people while making the video and was amusingly shocked when she received more than expected results.

It was a proud as well as funny moment when Morgan checked that her first video was viral all over the internet. Rose’s extraordinary yet hilarious expressions racked up millions of views along with approximately 87,000 likes. Her other two videos received as much appreciation as her first one. Morgan opened up by mentioning that she does not like to read the comments on her videos as she was sure that she must have received many demotivating comments along with the motivating ones. She added that it is sad how people can be so cruel and leave a mental impact with their hard words and comments.

Leaving the negative comments behind, she found it “pretty crazy” that how a bizarre makeup video went viral and trending on the tiktok so quickly. At the end she was happy that she was able to amuse a section of people in the time of crisis. She was blessed to receive a wonderful response from the audience. Her day shined when one of the viewers said that “you had me cracking up…. Thank you.” She was relieved that she made people laugh and have a good time.