There must be quite a few people who would get apprehensive about the new products they’re gonna use because clearly they just don’t want any side effects happening later. Whereas there are also some people who carelessly apply whatever lands in their hands. Just like this butcher, who instead of using a shaving cream, used a hair removal cream and was left with little hair on his face. 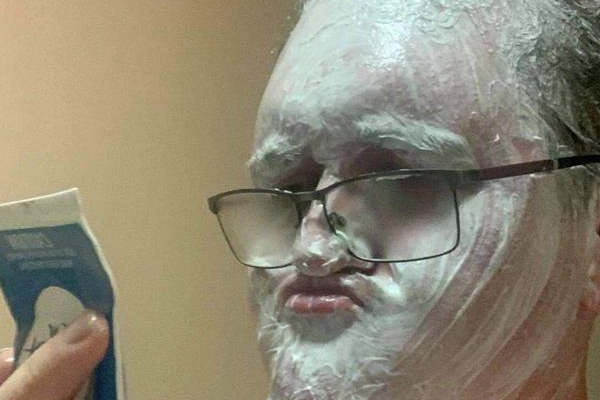 Ronald Walker, a butcher from Gold Coast, Australia, had accidentally made a blunder where he applied hair removal cream on his whole face while he was supposed to apply shaving cream. Now obviously every person would be able to anticipate what was going to happen next. A few minutes later when he realized that he had used a hair removal cream, he quickly washed his face off. But unfortunately, the debacle had been done, leaving him with just one eyebrow and negligible forehead hair. He had a very little beard, but now that was gone too.

All he could do now was regret the careless mistake he had made because his hair was not coming back anytime soon. He explained how offhandedly he used to apply his shaving cream all over his face, which anyway had never been an issue. But a while ago when he ran out of the shaving cream, he grabbed another bottle, not realizing it to be a hair removal cream, and applied it all over his face keeping it for five long minutes. In a short time, his face began to burn from all sides and it was then he perceived that he had made a big mistake.

He instantly removed the cream when he sent a picture of his burning face to his brother who informed him that it was the hair removal cream that he had all over his face. Once the cream was removed, his face went all red. And that’s when he noticed that the cream really worked. It had caused deleterious effects on his face that left him in quite for shock. Ronald had no choice but to live with it for a while. He thought of continuing back to his work as one would barely notice the lost hair until he really pointed it out.

He never really thought that his attempt of shaving his face-off would leave him with no hair at all. Nevertheless, he posted his hilarious look on social media without any hesitation of his reputation getting smeared when one of his friends recommended him to post it as he found it amusing. His video was able to gather more than 50,000 views in just a few days. The night he posted the video, it had around ten likes or so but when he woke up the next morning, the video had 1000 likes.