Aren’t wedding pictures the best thing ever? The most embarrassing and the most memorable moments are all together. And this three old little girl made it both memorable and embarrassing at the same time by flashing a middle finger for the photographers. 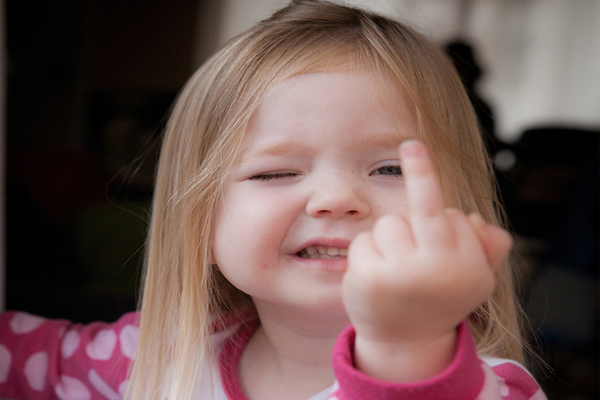 In November 2018, Hannah Earley, 33, got married to Nathan Earley, 31. However, there is just one reason that their matrimony got famous on the web. And it is their daughter who decided to show off one thing she had learnt. The problem with the showing of talent was the setting where she decided to do so. An untimely moment was obviously captured and it circulated on the internet.

The day was beautiful for the couple and everything seemed perfect. Hannah, who lives in Old Bar, a town on the Central Coast of New South Wales in Australia had hired a photographer for the family to get pictures clicked. After the ceremony got over, the family decided to go off to the side to have some family photos taken. That is when the little girl thought of showcasing her finger tricks.

There were people around and the girl had to do what she had learnt. All of a sudden she just popped the middle finger to show everyone and why not, it was the most appropriate timing according to her to show off the new talent.

The little one didn’t obviously know what she was doing and what it actually meant but she definitely knew the reaction she would get would be amazing. Fortunately, everyone present there found it funny instead of taking an offense. Everyone watching them getting clicked ad fun and couldn’t stop laughing.

The mother told that she kept doing it for one month straight. It definitely was funny but the mother is glad she is over it. She didn’t want the daughter to think that it’s okay to do it every time. Whenever she did it, the mother used to turn around and then laugh about it as it is tough not to giggle when a little girl is flashing a middle finger. Even today when people watch the pictures they can’t stop laughing as it is hilarious and something to remember.

The photographer who was hired deleted the offensive pictures but the Hannah’s sister Sharon had also been snapping at the time and captured the moment for posterity.
It would be fun to know how the girl reacts to these pictures once she grows old. Looking for a post on social media.