The arcane to having a good relationship might not be clear to everyone. There are issues even at the prior stage of marriage. However, Marvin Stone, 88, and Lucille Stone, 81, surely know what it is all about. 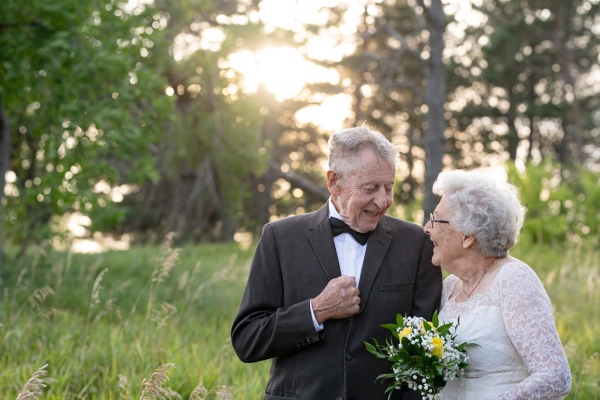 The couple from Nebraska celebrated their 60th anniversary while the photographer Kati Aury captured their precious moments. The couple wore the same wedding outfit that they had worn during their wedding, with Lucille wearing a white lace gown that she had sewn on her own and Marvin appeared in a black tuxedo with a matching bow tie.

Having their first marriage back in 1960 at a Lutheran Church in Sterling, Marvin was 29 years old while Lucille being 22. The couple celebrated the day by holding hands, dancing, and posing for the photoshoot in an open Nebraska field.

Katie Autry told that she could see how they both loved each other and felt it like an honor to capture their love. She also had tears in her eyes while shooting. For her, it’s a perfect example of true love and will always be the one for many years to come. Throughout this journey, both Marvin and Lucille have seen several goods and bad, but are still together. Plus, they’ve also raised three children.

Well, the first instance when they met each other was because they were teachers at the same school. Marvin used to teach Math and English while Lucille taught home economics. The snaps shared by Katie have been shared more than 3,000 times and received several likes too. With the pictures, Katie also shared what the couple advised other couples to do to make their relationship better:
1. Work hard
2. Be kind to one another
3. Think before you speak
4. Rely on each other’s strengths to overcome your weakness
5. Stay strong in your faith.

As a matter of fact, they also hold several things in common that brought them closer. Lucille said: “We’re both pretty conservative. We were Depression children. He was born at the beginning of the 30s and I came along a few years later for my parents like kind of a surprise baby.” Above all, their families also supported them so well that they were able to make such a strong connection.

Lucille’s father was emotional during her wedding. Both her parents liked Marvin so much that she never felt any misery before her wedding. She added: “You do what you have to do and by no means have we been perfect in our marriage. We’ve had arguments. We’ve had disagreements, but on the big things we’re pretty much on the same track.”