When a West Yorkshire couple renovated their ordinary garden into a lovely location, they brought a piece of their honeymoon back to the UK. When bringing Thailand back to the UK two years ago, a couple unwittingly predicted the Covid-19 pandemic and travel restrictions. Chris Ensell, 32, and his wife, Anneka, 31, agreed to construct a garden inspired by their lovely vacation after returning from the Southeast Asian country. 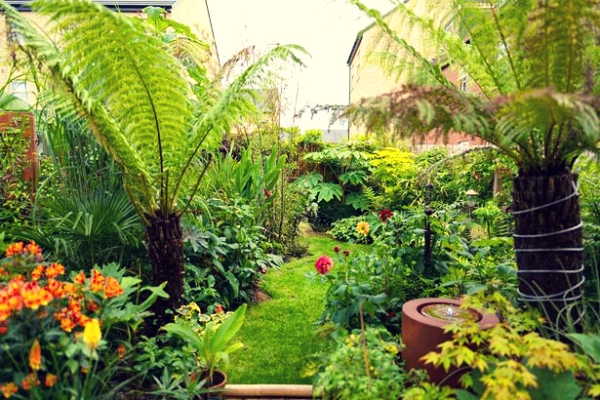 In the summer of 2019, the couple began renovations in their back garden at their house in Ackworth, West Yorkshire, and created their own tranquil sanctuary. Chris reflected on their home, which they had purchased in 2018, when the garden was little more than dry ground. He stated that when they initially moved home, the garden was nothing but dry, lifeless turf that had gone weeks without being watered. He hadn’t done any gardening before commencing that endeavor because that was the first house they had lived in with a garden. Their first house simply had a small deck with a few potted plants.

The 32-year-old photographer then went on to explain how they came up with the concept to turn their backyard into a tropical paradise. After spending some time thinking about how they wanted to create the garden, they decided on a tropical paradise concept because they had enjoyed their vacations to Thailand and Sri Lanka, he said. In 2018, they went to Sri Lanka for their honeymoon. They got a lot of ideas from a place in Bangkok named Jim Thompson’s residence. It was so relaxing and bucolic that they wanted to recreate it in their own garden so that walking into it felt like they were on vacation.

Nonetheless, transforming the yard of their British home into an Asian paradise was no easy task. To properly care for tropical plants, the newlyweds had to conduct extensive research. Chris explained, “It seems pointless to spend money on tropical plants if I don’t know how to care for them.” “I learnt on the job,” he continued. He has spent a lot of time on YouTube and watching gardening shows on television. The couple now has up to 300 different plant varieties, which Chris estimates are worth roughly £4,000.

The lovebirds got their tropical plants from certain producers and occasionally attended uncommon plant fairs to obtain as many exotic plants as possible. He explained that because tropical plants grew so quickly, it was difficult to determine where to put them in the yard and where they’ll get the most sunlight. In the summer, they’re a lot easier to care for; he only had to water them in the mornings and evenings.

Chris also stated that the summer was the finest time of year for their garden to look its best. Also, they had to dig up some of the plants throughout the winter and place them in their greenhouse with heaters to keep them alive. He continued, therefore research is necessary, so you know how to preserve your tropical plants in the best possible health during the cold months.

With the refurbishment costing roughly $1,500, Chris and Anneka enlisted the services of other family members to help keep the costs down. The couple sought to stick to a budget and purchased equipment on Facebook Marketplace for “as little as feasible” and sometimes for free. Chris stated seeing the garden come together more recently has been fantastic since the plants were getting to wonderful sizes now. They were overjoyed with the tropical motif they selected. They have their garden as their own personal holiday and sanctuary, especially during the pandemic because they couldn’t travel.