An Amazon customer shared a photograph on social media showcasing the efforts of a delivery driver who tried to camouflage the package with a handful of gravel from the garden – this left the viewers in stitches! 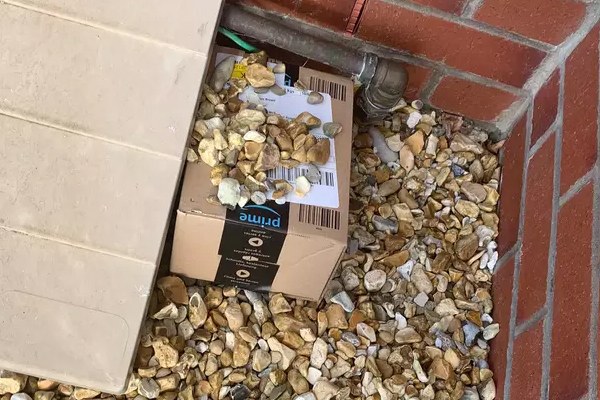 When it comes to online shopping, convenience is the biggest perk. One can comfortably shop at midnight or while at work. But the biggest challenge of online shopping is to be available when the package arrives; otherwise, be ready to face the consequences.

When the owner is not around during the time of delivery, the drivers often opt to hide the parcels. And some delivery drivers strive to conceal the package from covetous eyes. Well, not literally!

One such attempt of a ‘hidden’ parcel went viral on social media and sparked others to share their funny and poor delivery stories. The photograph was shared with the caption ‘Thanks Amazon for hiding my parcel’.

The recognizable Amazon box with a handful of stones sprinkled on the top had been placed on the path against the house. Definitely, the purpose was to ensure that it blended in and became invisible to the thief’s eyes.

Since it was still there when the owner returned home, the stupid technique worked!

A series of comments started where people described their delivery failure stories along with the photographs.

While one shared the picture of the package lying on the most obvious place where it could have caught the sight of an opportunistic thief, another shared an incident that took place in 2015when the delivery driver somehow managed to place the parcel on the top of the roof and left a note behind. The viewer wrote, “They probably should have left another note explaining how they managed to chuck it up there, and – more importantly – why”.

Another viewer shared her experience of Amazon Australia when the delivery driver got creative and hid a load of large parcels under a doormat. Had it been a flat parcel, the idea would have been incredible – but not in this case! She wrote, “There must be a global training module in hiding parcels. This is how Amazon Australia left mine”.

Yet another viewer shared the photograph where the delivery driver managed to place the package on the other side of the main gate but the owner’s dog destroyed the package.

Under the doormat, under the stairs, under the tree, are some common tales. But the best story revealed was the one where the package was marked as ‘handled to a receptionist’, and was signed by ‘Wheelie Bin’. Yes, the parcel was thrust in a bin!

One of the viewers complained about the way the package was left on the door and wrote, “They’re terrible! This is how ours was left… we live on a main road”!

Well, it was still better than the one which lied on the ground in the middle of a thunderstorm.

Although it provided a few laughs and complaintsbut delivery drivers have always provided an invaluable service – be it pandemic or not. They work tirelessly to save our time and effort.