A son named Rob Witts talks about the gift he received by his dad. When he was 14, he gifted his dad a handmade birthday card for his 42nd birthday. Rob’s father kept this handmade card safely in a box. He later decided to gift his son the very same card as Rob was about to turn 42! 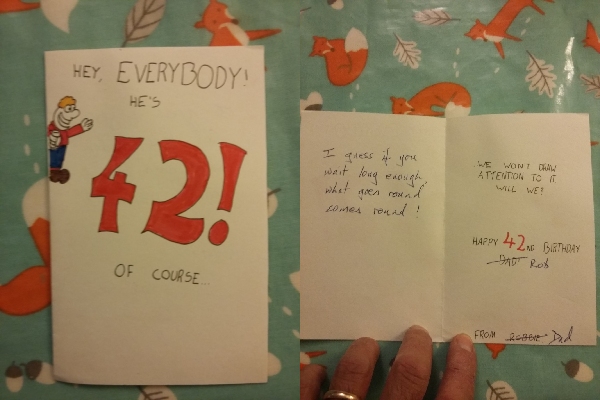 It brings a feeling of joy and happiness when the birthday is right around the corner. Everyone gets excited by the thought of birthdays. One feels elevated and thrilled. The only thing that comes to mind is the cake and birthday presents. Who doesn’t love receiving gifts? Everyone does! But these birthday cards aren’t paid any attention after that day. Once they are read, they are thrown away as trash. Although such cards bring a smile to our face but they don’t stay with us for a long time.

Once a boy named Rob gifted his dad a handmade birthday card for his 42nd birthday. He was 14 when he made this card. Unlike others, his dad decided to keep the card safely instead of throwing it away. He kept it in a box. Later, 28 years down the line, when he saw the card he felt delighted. He was glad that he made this decision to keep it safely. All this was totally unplanned! He decides to gift the same card to Rob as he was about to turn 42!

After 28 years, the card that was stacked in a box was used by the dad to gift his son. Dad thought that gifting this would be the most perfect gift for his son’s upcoming 42nd birthday. He made a few alterations and modified the card design. He then decided to revise the names and add his own personalized message. The message read “I guess if you wait long enough, what goes around comes around!” Dad made a sarcastic remark which happens to be written with a swift dose of karma.

Rob wanted to share this piece socially. So he took this to social media websites, where his story went viral in a click of a second. It has so far gained over 67,000 likes and thousands of reposts! That is how much people loved his story. Initially Rob captioned the post as a fair play game. He considered it as karmic justice. But eventually, he revised the caption fully disclosing that all this was unplanned! He expresses his fondness for his father and feels how great he is. Indeed, such a thoughtful gift!

Editing the caption didn’t make any sort of difference. People still liked it and found the entire thing quite hysterical. His post got some really amusing remarks! Where one says that he had gifted loads of stuff like wigs, incontinence pants, and a walking stick to his dad for his 50th birthday and now that he is 48, he wonders what he will be presented with! Another comment called it as primo dadding!

Even though it sounds funny to receive a 28 year old card, Rob will surely cherish this moment for lifetime!