We all are so busy keeping up with the pace of life that sometimes, we end up in a situation that we had never even imagined in the first place. Hannah Donaghue has been in a “surprising” state not once, not twice but thrice now. The third time was definitely overwhelming as she was pregnant with triplets. 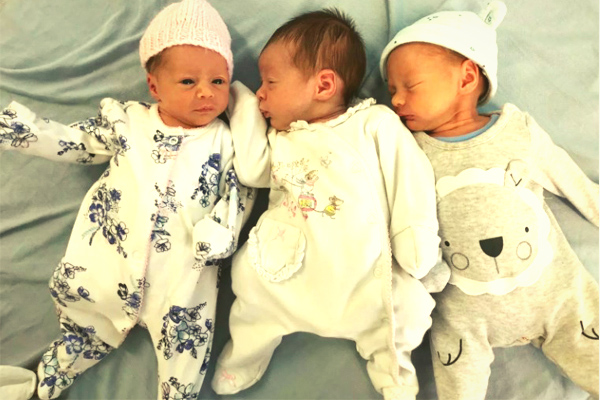 The 29-year-old Hannah Donaghue’s life has truly been a roller coaster ride and you will agree with us on this when you get to know her story.

What do you expect from your life when you are 18? Probably a good college and a job to survive in this world. But not always, we get what we plan! You never know what lies ahead of this road you are on. This is what happened to Hannah as she got pregnant when she was 18 despite being on the contraceptive pill and that obviously wasn’t a part of her to-do-list that year.

But Hannah did have that baby girl who is now 10 and it was all good in the hood. Hannah saw her doctor and started taking a new pill to avoid being in an undesired situation.

However, her plans were all futile as life was not yet done with its twists and turns. A few months later, she did not get her period and yes, she was having baby number 2. Hannah’s mom was always by her side when the feeling of stress and anxiety had surrounded her.

After the birth of her second baby girl, Hannah opted for a contraceptive implant but due to some complications, she had to go back to taking pills after eight years. She felt like her life was back on the smooth road but we all know bumps do exist on every road!

Hannah was not in a relationship and was not really on that track but then she met Ben, her old friend and things changed. They had some good time together that night and Hannah was happy with him. But a couple of weeks later, Hannah had to rush to the hospital as she was bleeding heavily even though she was not on her period.

The unexpected events followed her checkup and scan. The doctor revealed to her that they feel a heartbeat in there and soon that number increased to three. So, now Hannah was pregnant with non-identical triplets which means her body had produced three different eggs all when she was having the daily dose of her pills! What would you call this? A “miracle”, maybe!

Ben was supporting Hannah in all this and was excited to start a family with her even though they had been on just one date before. We don’t know what to feel about this! It is just amazing.

Hannah was given the news that she was going to give birth to a boy and two girls when she was 16 weeks pregnant. Hannah and Ben were now in the phase of dating and relationship which was definitely positive.

The pregnancy is never easy for any woman and when you are carrying three babies, it may get complicated and that’s what happened in Hannah’s case after 28 weeks. She had to take steroids in order to speed up the lung formation of the triplets as they might have to do an early delivery.

After 32 weeks, the babies came out as the doctors did a cesarean delivery for her. Now Hannah’s family had three little new members, Ella Rose, Kasey, and Lester.

Their house was now “full” of happiness and they are taking one step at a time to make sure everything is moving the right way!