How often do you look in the mirror on a daily basis? It’s alright if you have lost count, we are not judging anyone here. But have you ever wondered if animals are able to recognize themselves in the mirror? This experiment on fish proved certain points regarding the “mirror” matter and it’s definitely interesting. 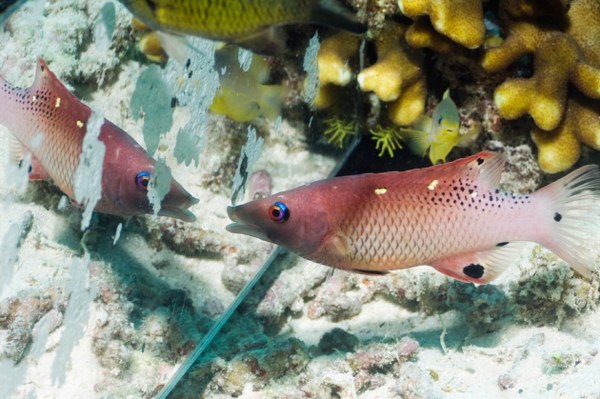 It was 1970 when the mirror test was proposed and since then, the scientists have found some pretty amazing results. One such finding was that when compared, few animals are able to get through the test. A fun fact here is that humans pass this test at a very young age of 18 to 24 months. This case is similar to orangutans and chimps. The man behind this discovery is Gordon Gallup Jr. who is an evolutionary psychologist at Albany College in New York.

So, what exactly is this mirror test and how is it done? It is as simple as it sounds. The animals are introduced to a mirror and the thing to note after that is their reaction. The animals might show some strange response to the test and that’s what is interesting to note here. There are certain important points that need to be observed which include:

First – What are the strange actions they do when they see their image and if they do anything unusual to check if the image imitates them?

Second – When exposed to the mirror, how often do animals examine their bodies in it?

Third – When a point is marked on the mirror which seems like it’s on the animal itself, do they try to remove it?

The mirror test was done on various animals and some unexpected results were noted. One such species (reef-dwelling species, to be specific) is the cleaner wrasse which when exposed to mirror did some noteworthy actions like swimming upside-down. This was actually observed at Max Planck Institute for Ornithology in Konstanz, Germany by Alex Jordan and his colleagues.

Another observation that caught everyone’s attention was the fish trying to remove a brown mark under their throat that was left when the fish were injected with a tag. The fish tried to get rid of that mark by scratching their neck against some object present there like a rock.

After much consideration, it was concluded by the researchers that fish have passed the mirror test. But Jordan added something to this conclusion by saying that the passing of the mirror test by the fish is not actually related to them having true self-awareness. This is something to be pondered!

You all might be wondering about the term “self-awareness” and the significance it carries in this experiment. It is significant to a large extent but we haven’t really given it a thought until now. We (as humans) are all able to tell a difference between our bodies and that of others, this is what being self-aware is! Fish are not able to do that, nor are they able to identify their territory and whatever belongs to them.

When the scientists considered self-consciousness as another factor, it was not proved right in the case of fish. So, the fish might have been successful in the simple mirror test but the elements related to recognizing oneself did not favor the fish.

Frans de Waal gave his opinion on this entire matter and told that it basically depends on the animal as they are all different and can possess a certain amount of self-awareness depending on their abilities. It is better to resort to some other tests that might be more helpful.

Mirror tests are interesting and hoping for some more animal-friendly tests that tell us more about them!