Saying ‘I do’ is supposed to be the best moment of one’s life. But a groom pranked his bride-to-be in the middle of the ceremony. The groom pulled a very risky prank along with his groomsmen just before saying his vows. 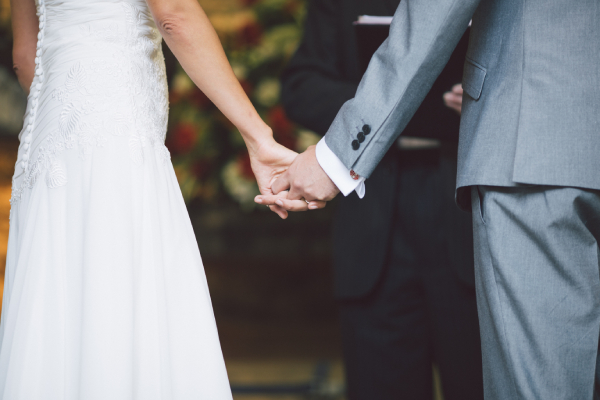 While some pranks may seem harmless and funny, others may turn into a complete disaster. A prank performed at your big day might break hearts if the timing goes wrong! A couple who is about to be wed always dreams of a smooth ceremony but what would happen if the groom decides to prank his bride in the middle of the ceremony while exchanging vows?

The moment the groom was asked to take his partner’s hand in marriage, he surprised everyone by saying ‘hang on’ instead of grabbing her hand. Everybody had one question in their minds- What is he about to unfold?

The groom then walks to his groomsmen, leaving his bride behind, and ended up in a choreographed huddle. Together, they pretended to discuss this big marriage decision, and also looked up at the bride-to-be in unison. Then, after the chit-chat ended,the groom returned to his bride, held her hands, and said ‘yeah, I do’ – leaving all and sundry in stitches.

The video of this incident was shared on social media with the question: “Ladies – at your wedding, would this qualify as an acceptable joke, or a reasonable cause for beheading?”

When the video reached out to the masses, everybody had a completely different reaction-some called it ‘well-executed’ and others, ‘tacky’.

A viewer described her feelings and said that if it would have happened to her, she would have probably cried right there on the stage, andcommented that she personally hated the prank.

Someone wrote, “Honestly, I don’t appreciate this type of humor, and I would not find it funny if my FH would ‘pretend’ to have to think about whether or not he’d actually like to marry me as we’re standing there about to be wed. I think it’s pretty tacky and awkward”.

Another viewer expressed, “But if the bride found it funny, that’s great for them. For me, it would have slightly ruined the ceremony”.

Where some people did not appreciate such kind of ‘humor’, others found it ‘memorable’.

A viewer mentioned the stunt to be ‘perfectly executed’ and ‘truly original’.

Another viewer said, “Look, if she’s gotten as far as marrying him then she should know him well enough to judge what he’s up to”.

Yet another added, “If they’re not already on the same page about these things they’ve got bigger problems than his sense of humor and timing”.

A viewer also tried to balance the conversation in the comments and said that it seemed pretty obvious from the reactions of the guests that this is 100% who the groom is and that he is a ‘good guy’.