A house dubbed as the ‘skinny house’ has captured the internet with its unique shape. When a video was uploaded on TikTok, people were baffled by the utterly small size of the abode. Many couldn’t imagine how someone could even live inside it. But there is a surprise inside. 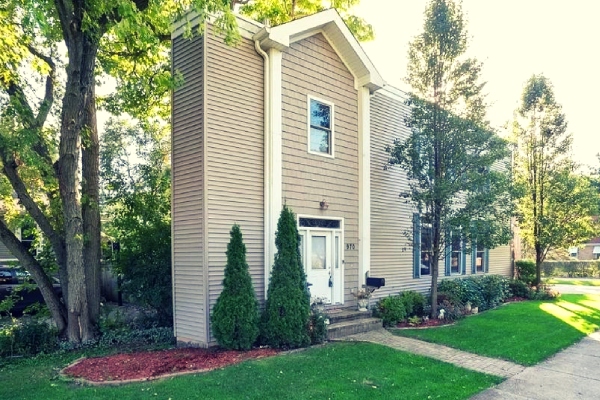 Posted by the user eli.korn, the house was in a pretty unusual shape and is situated in Deerfield, Illinois. Besides, it is also famous among the residents living around. Popularly known as the Pie House, the property is now for sale and costs $270,000 (₤206,999). The social media users were bewildered by the tiny house and wondered how people could live inside the same.

Moreover, some people responded to the video, telling it seemed deeply unsetting and looked like a hallway and not a proper house. But if you go through the estate agent listing, the answer becomes clear as to what makes it so special and popular among many. Albeit looking so tiny, it is actually bigger than you’d really anticipate. Known by the name ‘Pie House’, its shape resembles a slice of pie, because it is smaller at one end, with another one getting wider as you go ahead.

The description of the property says: “You can now own Deerfield’s famous Pie House! This iconic home is larger than appears, with over 1600 square feet of living space including the finished basement.”

It further read: “The property is also said to feature two bedrooms, with one located in the basement, as well as two “and a half bath”. So, to clear more doubts on this popular video on TikTok, one user in the comments named charlieweissman12 expounded the reason behind the strange look of this house. He said that the land on which this home was built was somewhat rectangular, being just 0.09 acres in size.

Nobody was eager to buy it, which is why the current owner bought it at a cheaper rate. Therefore, the Pie House had to use all of the space, and that could be possible only if it was in its present shape. Greg Weissman, a local developer from Advantage Properties, constructed the best possible house out of it in 2003 but had to give up thinking about the shape and structure. Besides, he was out of more ideas, so he had to stick with this one only.