Leave the exceptions aside, the task of following the tradition in a wedding is itself enervating. And a bride must have felt the same way when her husband forgot to follow it properly and went on to feed himself. 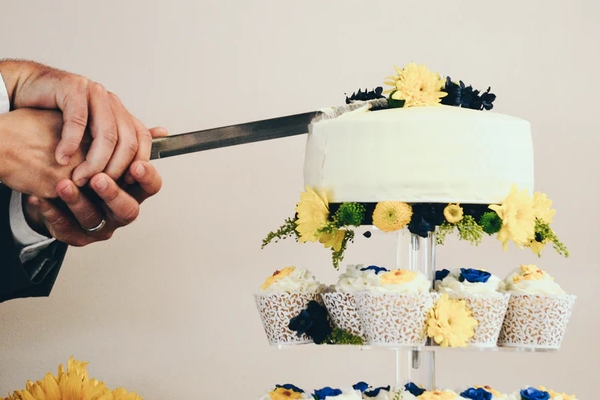 Allie Downs, the bride, and her husband, Jake had their wedding reception where Jake did a blunder and it was captured by a guest. The pair had cut their cake, as it is considered to be the initial thing as per the practices. It is known to be a symbol of commitment. Cutting the cake is followed by the second part where both people have to feed each other the piece of cake, as it proves that you have properly completed the first task as a married couple.

However, the things went out of the way when Jake had no idea that he had to feed Allie as well and he started feeding himself with Allie being totally astonished. The video, which has now gone viral on TikTok, shows Allie holding a plate for the chocolate wedding cake, while her husband, Jake has already begun hopping on to his piece of cake when he had to do the opposite.

You can clearly see the state of shock on Allie’s face. Then, it follows by Allie silently telling him that he has forgotten to do the right and just slipped up. When Jake is addressed with his blunder, his face drops when he realized that it should have been the other way. Besides, Allie decided to share the funny incident on TikTok with the caption: “Honestly thought he had seen the cake tradition at a wedding before.”

Her post has gone viral, with more than five million views, 636,000 likes, and 1,800 comments. Well, there were also people in the comments who could relate to her story. A person said: “He said I’m hungry too bad.” The second one commented: “Why aren’t you eating yours? We are supposed to -”

Several others could see how confounded Jake was looking at the moment. Moreover, Allie isn’t alone in this path, some women have already experienced the same. A woman was shocked at hers too when her husband cut the cake and fed himself instead. Also, the other woman had the blunder at its best. She informed: “My husband and I both fed ourselves the cake and didn’t think twice until a bunch of family members yelled at us.”