After losing her husband to a long- term battle to cancer, a gift on valentine’s day was the last thing she expected and yet, that is what happened to her. Knowing that he wouldn’t likely make it to valentine’s day, Randy had already arranged a beautiful bouquet of flowers and a poem before his death so he could surprise his wife. 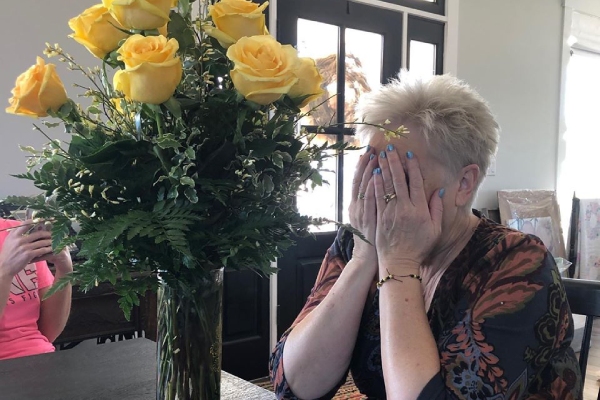 After fighting his battle with Glioblastoma for a long time, Randy Tenner, 65 finally succumbed to his illness last December. Obviously devastated, his wife of 45 years was still coping with his death and the last thing she was expecting was a gift from his late husband on Valentine’s day. Every year, Randy would gift her wife a beautiful bouquet and a handwritten poem. However, this time, expecting that he might not make it to valentine’s this year, he made sure that her wife would still receive flowers on this special day.

This year, when she least expected, she was received with a beautiful bouquet of yellow flowers with a red rose in the middle. Along with it was a note which said: “Roses are red, Violets are blue, yelling from heaven that I will always love you. With love from your eternal valentine, R.T.” reminds you of “P.S. I love you”, doesn’t it?

The video is doing rounds on the internet where she was seen approaching the table. As soon as she realized the bouquet was from her late husband, she understandably burst into tears. It is known that the two were childhood sweethearts and got married in 1974.

Today I got a special delivery straight from heaven. Randy set this up before he passed away and I can’t think of anything sweeter. I miss my valentine so much. He’s the best ❤️💔❤️

Sharing the video on Facebook, Debbie wrote:
“Today, I got a special delivery straight from heaven. Randy set this up before he passed away and I can’t think of anything sweeter. I miss my valentine so much. He’s the best.”

According to their children, Randy had arranged the surprise months before Valentine’s Day, with the help of a friend who owns a flower shop.

Randy, along with his wife, is survived by his eight children and 33 grand-children and 8 great-grand-children. He used to coach Little League and ran a hotel and property management company. Jordan (one of his children) says that despite his busy schedule, he would always make time for their children and was always there for them. “He had eight kids, but he always made me feel like an only child. His philosophy was scattering sunshine, spreading happiness.”