People get all kinds of tattoos on the most random places on their body and no, we are not at all complaining. It is all cool as long as they have no regrets. But this women just took a step further in the tattoo world by getting the KFC logo inked on her lower lip. Yeah, your feelings are our feelings! 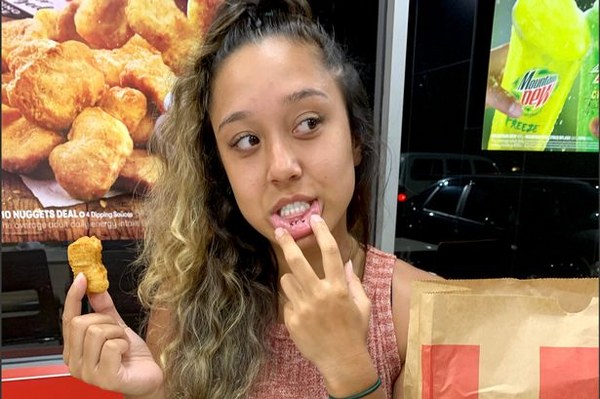 Getting tattooed (in the most normal way) is quite scary. You need to prepare yourself to endure the pain and also need to be very sure about what you are getting inked. This is the procedure followed NORMALLY but now when the times have changed and people like to be spontaneous in everything they do, tattoos tend to be more “creative”.

Foodies can relate here which most of us are.

Not Hungry? Eat (because then you will get hungry). WOW!

Tabatha Andrade from Australia is a foodie and she loves nothing more than KFC. You can call it love, obsession or whatever you like after reading what she did to express that. Her love for KFC chicken (which has no bounds) gave her enough strength to get a tattoo of KFC logo and that too on her lip.

Getting a tattoo for something or someone you love? Sure but not on the inner side of lower lip for us! We don’t think we are that committed, we are still learning.

Being committed to chicken is easy because you know it will never disappoint you. Who does not love chicken! This was the same reason she gave when asked the reason behind getting this tattoo. It was all planned and she had given a good thought before taking this step.

Her visits to KFC happen once a week and that’s the one day she keeps waiting for all the time. Those crispy chicken pieces and nuggets are worth the wait. We probably would go insane if we start describing the chicken here in detail. You would have to run to KFC to satisfy your cravings that arise from here!

When you are so addicted to a certain thing, there is a good chance that your friends would taunt you on a regular basis. This is what happened in Tabatha’s case. Her friends started calling her by a name (an amusing one, of course) which is “The Chicken Connoisseur”.

This tattoo isn’t the only proof of her obsession with chicken, she has even named her dog Nugget. We don’t mind that name at all, in fact, who cares about the name. It’s a dog and that’s what matters.

Let’s come back to the tattoo. Let us talk about the reaction her parents had on seeing her KFC logo tattoo. When she first showed them, they were convinced that it is not real. But gradually, they got used to it and everything is under control. Turns out, she has another tattoo that says “family” somewhere on her body which is a big deal for parents, bigger than that lip tattoo (maybe).

You are probably wondering the pain she must have experienced while getting that. But when asked, she said, it did not hurt at all. I have absolutely no regrets. It’s my favorite tattoo.”

This whole idea came from Kendall Jenner and her lower lip tattoo “meow”. You see how influential these celebrities are! We say that in a completely positive way.

Tabatha is now hoping that KFC gives her some free meals as she has proved her love in the form of a tattoo. She expresses her thoughts, “It would be awesome if they gave me free KFC because of it. Let’s see what happens.”

We don’t know if she’ll get free KFC or not but we appreciate her courage and her ways of expressing love.