Humans are not the only ones who wish to explore freely and feed their curiosity. Animals possess such similar emotions too and always want to flee from the cages they are kept in. This pair of chickens are those adventurous creatures who could not stay in their coop and their owner always found them roaming around in the streets exploring the outside world. But he had a brilliant idea to ensure they are safe outdoors. 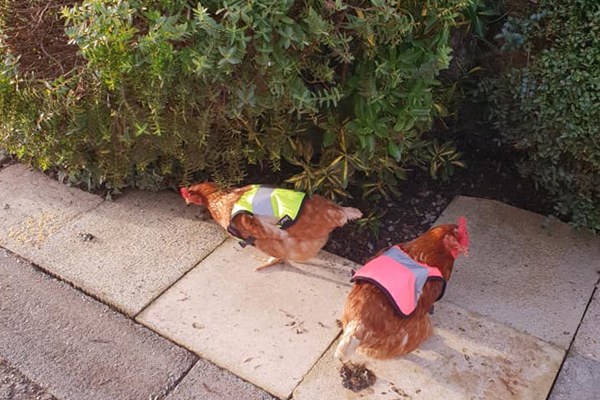 Freedom is what we crave and keep chasing until we find a place to break our shackles and wander like the wind. Turns out, we are not the only ones on a quest for freedom, this pair of chickens have gained quite a few fans around their neighborhood after they refused to stay in the coop.

The two hens, Davina and Deidre, were spotted exploring the nearby areas by the neighbors of their owner, David Williams. He had bought this adorable pair as a birthday gift for his 8-year-old son.

The plan was to keep Davina and Deidre in the yard. However, these chickens did not find this plan interesting and headed out for a stroll every day. David could never keep them inside the coop and he understood that his attempts at confining them in a fixed space would go in vain.

“I started off trying to keep them in. But right from the start, they had other ideas—they wanted to be free to go where they wanted,” he revealed.

But he had to ensure the safety of his chickens as they even stepped out during the night and it was risky for them to walk around amid speeding vehicles. So, David bought high-visibility vests for them.

He shared, “They started their wandering in the summer, when the evenings were still light. But as the nights got darker, we were worried that people wouldn’t spot them if they were near a road or on a driveway.”

Davina and Deidre enjoyed being out and explored the neighborhood and the streets of Milton Keynes. It was a morning and afternoon routine for this adventurous pair!

The neighbors seemed to be really fond of their new friends who always stopped by their house. One resident expressed, “I love it when they come in my garden and eat the snails that eat away at my plants. They’re doing me a good turn. They’re part of the community now and they brighten our days.”

David had brought these chickens home from a company called Omlet. Since their arrival, he had been taking really good care of them. “We still feed them proper food and people give them all kinds of tidbits. But they enjoy finding food for themselves too. It must be doing them good because their eggs are amazing,” he revealed.

Now, these free spirits go on a stroll in style wearing the high-visibility vests that keep them safe around town. David definitely deserves credit for being so thoughtful and attentive to their needs.