It is about a man who once saw his own school picture on a website while he was scrolling. He was shocked to see that his eight-year-old picture was being shared as a meme for years on internet. His picture was used by one of the accounts and there were even merchandise for sale with his face on. 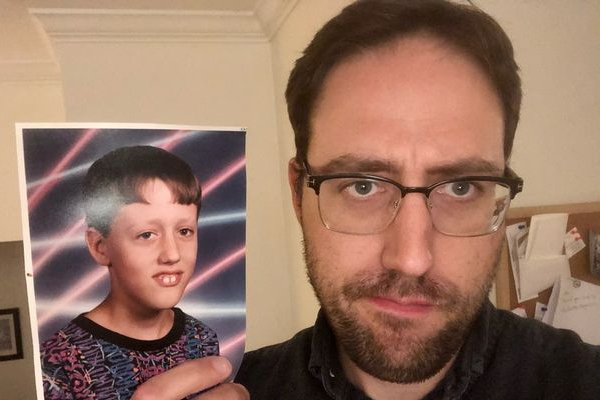 There was a man named Adrian Smith who lived in North Carolina. One day he was just scrolling through one of his social media accounts. While scrolling down he came across a familiar looking picture. He was perplexed. It was then that he discovered it was his own eight years old picture when he was in third grade of school. He couldn’t believe his eyes that his picture was on the internet for years and it wasn’t known to him. Later he realized that his picture was used as a meme.

He had no idea that his eight year old self was used a joke on the internet for years. The picture was of when Smith was in grade three, which is said to be fourth year of school in UK. On one of the social media accounts, Adrian Smith’s picture was known to be ‘Grayson’ since 2017. Adrian revealed via his account that his picture was only to be found on a wall by his grandma’s backdoor and nowhere else.

In 2008, when he shared that picture on his blog post with caption “We Have Lasers!!!!!!!!” little did he know that one day his picture would be viral on the internet as a joke material. Describing the picture, he said that he had successfully managed to find a top that matched the background and he had paid an additional $2 especially for it. Adrian said that he felt very proud after that picture was taken. His smile in the picture was in itself quite self-satisfied.

Adrian went on describing his experience on how shocking it was to see a picture of him pop up while scrolling. He said he had two options. One would have been getting nuts about it and asking the account owner to give all the profits that he earned from the meme he created out of his picture! Second option was the one he actually practiced, owning it. Adrian posted on the networking website saying it to be a surprise.

Where one of the memes said that the picture looked as if Grayson was transformed into a Chia Pet, another said “like this image of Grayson to revoke his computer privileges.” The most unbelievable part is that there was even merchandise for sale with Adrian’s picture on! From the day he got to know about it, he was in touch with the original creator of the meme. He had no issues if the creator continued using his picture.

Initially Adrian recounted his experience of bumping into an old disconnected version of himself as the most bizarre experience. But later he took it jokingly and was okay if the creator wished to carry on using his picture. He found the internet as a weird thing as everything was out there and even products were sold with his face on.