Dave Palazzolo had installed a security camera to detect any movement at his driveway. But after some days, he was inundated with the alerts he received every time someone arrived on his property and his camera starts to record all of it. His miseries were at the peak until he found a kid riding bicycle in his driveway. He then went all out to surprise the little visitor. 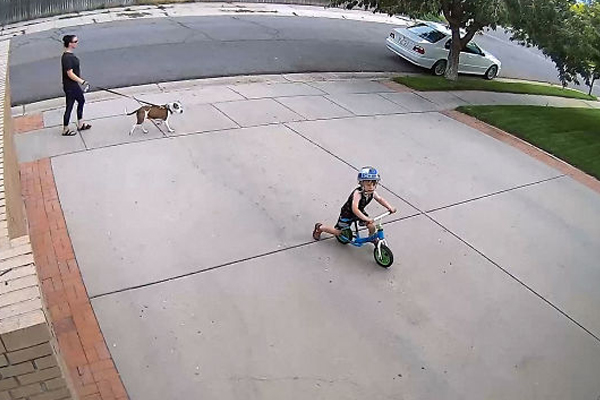 Usually, homeowners find it necessary to keep track of anyone reaching their front yard and Palazzolo did the same thing too. But every night, a kid arrived on his bike to visit his driveway and it kept growing Palazzolo’s frustration when he received several alerts. With the days passing by, he was getting more annoyed and wanted to see it coming to an end.

On the contrary, he himself is a motorcycle rider and also one of the founders of CanyonChasers Motorcycle Adventure, Sport and Touring. So, once his anger dwindled, his wife gave him an idea, in order to make it more interesting for their frequent bike rider. Being open to sports and outdoor adventure, he went out to his driveway the other night and made a racetrack for the kid. The long racetrack also comprised an entrance as well as an exit arrow.

Guy’s security camera catches kid tearing it up on his driveway almost every day, so he decides to do something about it. pic.twitter.com/ZDVb7zLgZo

Now, he was waiting for the guest to come, and it didn’t take him long to see his visitor back. As soon as the kid came, everything got recorded in the security footage and it seemed that the rider was having fun with the new challenging track. Palazzolo uploaded the video on YouTube. The young boy could complete the challenge several times. And every time when the track was washed away with the rain, Palazzolo created a new one.

With the fun reaching the pinnacle, he made tracks using more of the space at his driveway to design longer track with several obstacles increasing day-by-day. Palazzolo said: “I don’t know who’s having more fun with this, him or me!” And not only the kid alone, but others also came in to give the new track a try. Many kids on scooters, moms on strollers, and people on their bicycles appeared in the footage.

And with each day passing by, Palazzolo could see his young visitor getting more ebullient and skillful with the augmenting challenges in his driving course. For sure, the credit goes to Palazzolo and his wife, who came up with such a great idea. Maybe he can wait for the kid to become more skilled like him so that he can ride with him and his group someday.

Woman Unintentionally Shares A Funny Wi-Fi Name With her Boss

Funny Yamini
Social media freak, Jess who had apparently been facing some internet issues in her area, tried to prove her negligence towards work to her...

Intriguing Yamini
Everyone has got into new hobbies during the pandemic. Some of them had recreated theme park rides in their home and some engrossed the...

Funny Yamini
Small sweet gestures can go a long way in making one’s day. They let one bask in bliss and satiation. Not just that, they...

Funny Yamini
The world is full of callous souls who do not spare a moment to extract their pound of flesh. These money-minded people support no...

Funny Yamini
A man named Deric Cahill lived in the US. He had recently rented a car from a car rental enterprise. The entire process of...