Colombian mom, Marcela Tascon, was left with no other option than to shave her head after a stranger stuck a hat filled with glue on her head. The misery didn’t end up here and even caused second-degree burns. 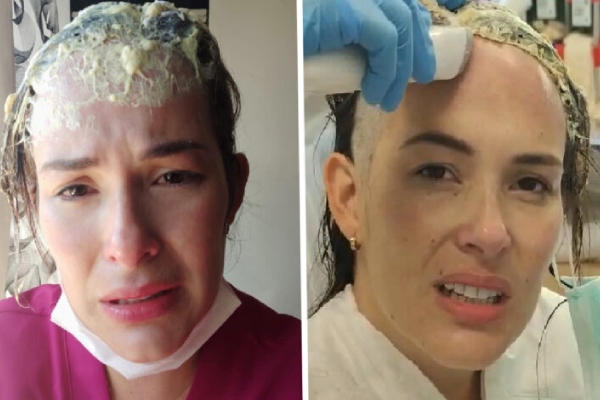 As soon as she opened the front door of her abode at Valencia, Spain, a stranger came up and put a hat filled with glue on her head. She immediately rushed to the hospital but soon realized that there was nothing that could remove it. Therefore, the doctors had to shave her head and remove the glue to treat the burns.

The incident happened when somebody arrived at the doorstep and buzzed her doorbell at 9 AM. He claimed he had a present for her and the incident followed by Marcela opening the door. She saw him holding a bouquet of flowers so Marcela welcomed him to her apartment. However, the situation changed all of a sudden.

As per her, once at the door of her house, he threw the flowers at her feet in front of my eight-year-old son and verbally abused her. He then pulled the hat over her head. “He ran away, my son was shouting, very scared, and I rushed to the bathroom to clean up my head and asked my son to call the police or friends.”

Not only did the hat contain glue, but also some corrosive substances that caused her second-degree burns. Now, if you think you’ve heard it for the first time, it certainly isn’t the only news of its kind. The doctor apprised that a lot of such incidents have already occurred in Colombia, commonly known as ‘doing the shampoo.’

This practice usually takes place when a jealous wife finds out that their husbands cheated on them or if they are jealous of other women. Marcela has her beauty clinic in the same building and she often receives suspicious calls from a random woman with a Colombian accent. The woman had also called her a month ago for an appointment at her salon and asked for the location as well.

“Two weeks later, I saw a suspicious man in my building holding a mobile phone and I asked neighbors if they were expecting a visitor,” she said. A moment before the incident happened, she received another call from a woman whom she believes to be the same person asking for the appointment. Marcela says that the man was sent with an intention to attack her. Police have been looking into the matter, but as of now, no one has been arrested yet.