We all love to add some hues and designs to our homes for a vibrant look. While some like to paint the indoors according to their preferences of the colors, others like to pour some creativity on the outdoors of their house. One woman did the same and painted her garage door creatively but turns out, one of her neighbors was not at all impressed by that graffiti and send her some rude messages regarding that. 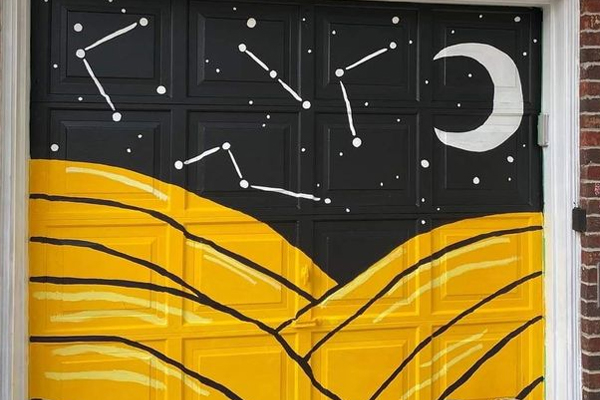 This homeowner wanted to add some vibrancy to her property. So, she went ahead and painted her garage door that initially had a dull and bland look.

This woman’s only aim here was to make that garage door attractive and lively. However, someone from the same area had a strange and awful reaction to her painting. They sent a harsh message to her about how her “hideous” graffiti devalued the other homes in the neighborhood.

The woman turned her garage door into something unique by painting a night sky and constellations on it. That’s something we don’t come across everywhere! She was satisfied with the outcome and loved every bit of it. But some stranger had an entirely different opinion.

The homeowner received a typed letter from this person. They accused her of destroying the look of the other houses with her graffiti. This picture of the cruel message was shared on Facebook and people started commenting on the post expressing their views.

The letter read, “You just devalued all of the homes in this area with that hideous graffiti at the front of your house. It has made the entire neighbourhood look like a low income ghetto.”

“You couldn’t have put it inside your house or on an interior wall vs force us all to have to live with that? You have compromised everyone’s property value and resale opportunities by doing it with no consideration for anyone but your tasteless self.”

“What a total lack of respect for your neighbours anyone else’s value of property or pride of ownership in this neighbourhood,” it further stated.

They added that they feel sorry for the people living on the same street as her and are grateful that they are not one of the immediate neighbors but their visitors would still have to pass by that painting and it’s not pleasant. They ended it by writing, “Shame on you! You have no class!”

People could not tolerate such rudeness. They started commenting below the post about how they would have dealt with such people.

One wrote that they would repaint their entire house with the same graffiti to make them regret their decision to type this brutal letter.

“I’d straight up project that letter on to the front of my house,” another one commented.
Someone said, “Can you imagine being this unhappy with your life that something as minuscule as this sets you off that much? Good lord.”

It’s bewildering to see people being so rude and cold-hearted. If they can’t appreciate the efforts of the other person, they should rather stay silent instead of being mean.