A child in his/her growing years is mostly influenced by his/her parents and their actions. Children tend to believe everything that their parents tell them. Recently, owing to this innocent nature of children a seven –year- old girl was tricked into believing that her middle name is BANANA FACE by her own father. 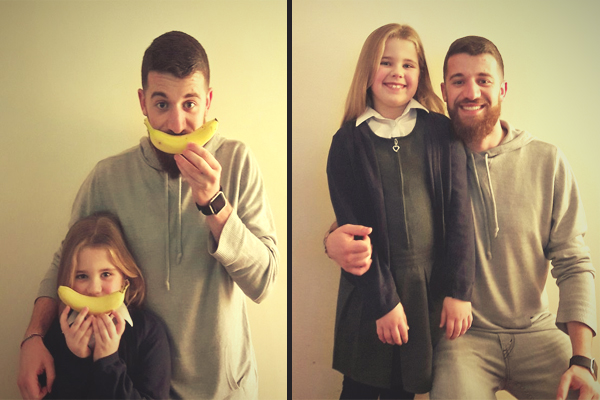 Richard Holmes, a 26-year-old dad from Great Barr, Birmingham, mockingly pranked his seven- year-old daughter Katie-Ann. He told her that He had given her a very strange and unique middle name when she was born, BANANA FACE. He thought that his daughter would not believe it and forget it within hours but that little innocent girl believed ever single word her father told her and was even embarrassed about it.

One month later, while reading a Katie’s homework Richard, a prankster dad was surprised when he found out that Katie believed what he told her in his prank and believed that her middle name was ‘banana face’. The Year 3 pupil, believed that her middle name was actually ‘banana face’ and it was a very weird thing for her. This whole hilarious incident took place when Richard came across a ‘about me’ section in a paragraph in his daughter’s homework.

In the paragraph, she wrote that having this middle name was a very embarrassing thing for her. She also stated ‘I will never even tell my best friends/BFFs’ and added ‘even if they ask nicely’. Her father also shared a photo of the paragraph on the internet. He revealed: “I was just winding her up. I told her that her middle name was banana face, because it was the first thing that came into my head.”

Richard continued: “The way she reacted I just had to carry on the joke, she said ‘No it isn’t’ and so I told her to ask her mum who must have played along with the joke after I dropped her home. “I didn’t think she believed me then and because I didn’t hear anything else, I forgot about it.”

“That was until I opened her homework weeks later, when I turned back a few pages to read what she had been writing about and found a double page ‘about me’ section. I was halfway through it and just started howling hysterically. When I read the part where she says ‘I’m not going to tell even if they ask me nicely’ I was in bits, I was laughing so much.”

Eventually, Richard had to reveal the truth and as soon as he told his daughter that it was a joke both of them were howling with laughter. Richard noted: “I don’t think I’d ever seen her laugh that hard in my life, I think we were laughing for around 25 minutes.”

He further added to his story how everyone he shared the incident with reacted. “Everyone I’ve told has found it hilarious, the only response I’ve had has been laughter. I can only imagine the jokes that went around the staff room after marking it, I’ve not seen any of her teachers yet, but I’m not looking forward to parents’ evening. Katie-Ann can relax now that she knows her middle name isn’t ‘banana face’, even though I am quite tempted to change it.”