After the girlfriend broke up with a schoolboy because of his attitude, the boy acted like a true gentleman. He applied his best aftershave and brought some flowers to win back his love of life. He’s been in a relationship with her for a long time. 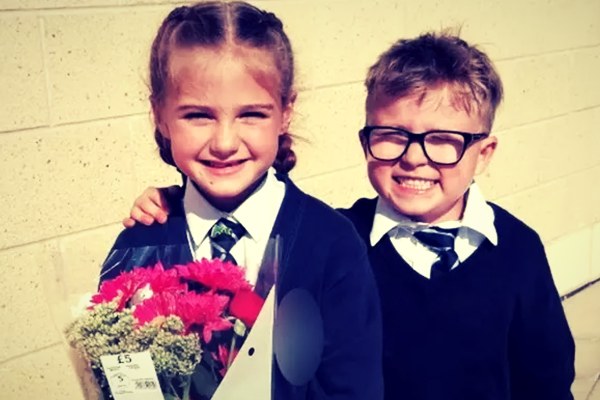 Harley Glenwright’s, 7, girlfriend, Sophie Clancey, broke up with him on the very first day the school reopened after the long-lasting lockdown. Harley suffers from ADHD and autism. He had got some anger issues. There was a new teacher at the school with whom he got angry. His behavior was not up to the mark of his girlfriend. Therefore, she left him in tears.

Harley explained the whole scenario to his mom. He was sad and sorry for his behavior and wanted to make everything right. His mother, Stefania, suggested taking some flowers for her. She intended that the flowers will make Sophie feel special and she would forgive him for his bad attitude.

The plan of giving flowers has worked before with a staff at school who was once a victim of Harley’s meltdown. Nonetheless, this plan worked now as well. Sophie was on the seventh sky after receiving those flowers and also gave a big tight hug. It was a happy ending and, in the end, love thrives.

As Sophie was late the other day, Harley had to wait the whole day to give her flowers and say sorry. The wait was worth it as his girl found those gestures overwhelming. Harley was happy coming back from the school and announced to his mother that they are back together. He even promised that he will work on his behavior so that he would never make her girl upset again.

Stefania likes Sophie so much and invited her to come home for a little play date. She told that during the lockdown when the little lovebirds were not able to meet, even then Harley used to talk about her whole day. He always wanted to see her. His diagnosis has made the school challenging for him. But now the mother is tension free as Sophie offered to help him with his anger issues.

On the other side of the story, Sophie showed happiness to her mother, Jacklyn Clancey, after showing her the flowers she got. Sophie was in love with Harley and told her mother that “she loves him to the bits”. She even promised to get something for him as well like a toy or anything that would make him feel special.

Sophie insisted to keep the flowers in the vase. She even considered the incident as the best thing that has happened to her since lockdown. The mum also liked the gesture so much and appreciated Harley’s mum for raising such a gentleman. She shared that her boyfriend never brought her flowers even on her birthday. It was very sweet of Harley to bring flowers indeed.

Jacklyn used to like Harley so much and it was really sad for her when she came to that he and Sophie have broken up. Nonetheless, she was very glad that they have resolved the issue among themselves and both of them are very happy now.

The people are interested in knowing what will happen next in their love story. They are commenting on the story and asking for updates.