Here’s a seemingly funny story for you from Dingmans Ferry, Pennsylvania where a mother shopping at a grocery store along with her baby was accused of stealing by a stranger who claimed to the cashier that she was carrying a fake baby to steal yogurt. Patricia Larkin, the mother took to a community on Facebook to describe this incident. 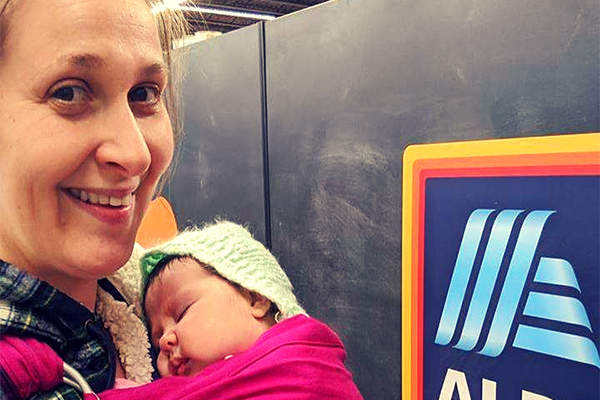 This mother was shopping at the Lacy Township Aldi along with her husband, her three year old daughter, Rosalia and a baby who she was carrying along. When a mother has to go shopping with a baby, her first wish is to have the baby stay calm and not be a burden on her little trip around the store.

Larkin said that the baby had slept in some time and she was just starting to feel a little relieved when a stranger woman approached her and remarked how she had her hands full. The mother took it to be a casual conversation and replied in a similar tone saying this is how a mom’s life goes. They exchanged smiles and the woman went away.

Soon when they reached the check-out counter, the same woman was standing ahead of them in the line. This woman when reached the counter, leaned over to the cashier and told him that she doubted the woman behind her was stealing yogurts and putting them in the ‘fake baby’ thing that she was carrying. The family behind her heard it and both mother and father started laughing. Patricia justified to the cashier that she stole nothing and it is a real baby with her.

In her post on the Facebook group she justifying her innocence told that not only is yogurt extremely cheap at Aldi, but she herself is lactose intolerant. Both she and her husband found it to be hilarious. Patricia thanked the stranger for giving her a good laugh adding that she really needed one after staying up all night looking after her ‘100 percent real’ baby.

The post circulated widely online and apparently also reached the stranger woman, Aileen Krupa. This woman then commented on Larkin’s post saying that it was she who was being talked about and that she was not ashamed of making that remark. Krupa said that she would have directly asked Patricia if she was stealing, but she feared to put herself in danger. She added that being in retail, she knows that shoplifting involving fake baby is pretty common.

Krupa commented that she herself took a sigh of relief when the baby finally yawned in the check-out line. Although Krupa justifying her act in the comments, she was roasted in the replies by some people. Replying to such comments she said that she is not ashamed of it and she will continue to take such actions if she spots anything suspicious of crime. Krupa was happy that the family was amused that offended by this incident! Larkin was not having any bad feelings for Krupa, she just wanted the readers to focus on the humor and the good part of the situation.