There is an abundance of talented people on this earth. Art and painting is something we see people following and doing in ways which are unique and of course, amazing! If you think you know all about what’s going around in the “painting world”, then think again as a mom has given a spark to a new trend which is absolutely spectacular! 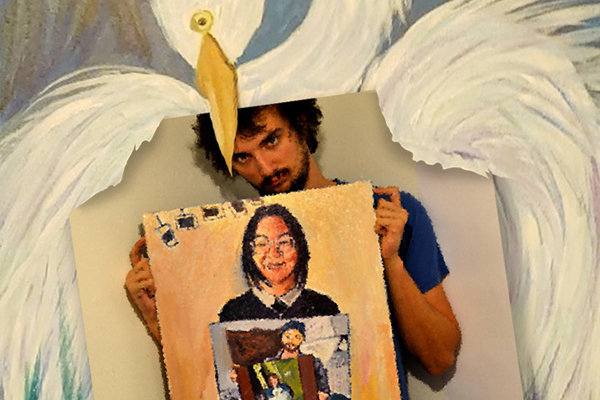 You might not know but your parents do have certain talents which they have kept to themselves, probably unintentionally. We are glad this Reddit user Gaddafo recognized his mom’s talent in painting and put up a picture of her holding the beautiful piece of art for the world to see.

His mom was not too sure that her art pieces were anything close to being wonderful but once her swan artwork was on the internet, it received love and appreciation from every person who saw it. Isn’t that just so cute!

That’s not the end (not at all!) as the appreciation was definitely flowing in but the way people chose for this was special and incredibly sweet!

Artists came up with something really creative which was started by a user k__z on Reddit. He saw the picture of Gaddafo’s mom holding her phenomenal artwork and painted that exact moment. He then held his painting and clicked a picture of himself in that scenario. So, he was holding a painting of Gaddafo’s mom holding her painting. He posted this photo in reply to Gaddafo’s picture on Reddit and the spark had been kindled.

Another user lillyofthenight on the same platform took this trend to the next step by creating a painting of k__z user with his own painting in his hands. You all know now what he had drawn! Now try to understand the painting by lillyofthenight user and you’ll see what an unusual concept had set in motion.

Don’t think this was the end of this series! It had just begun and artists jumped with great enthusiasm in this pool of creativity. More artists on Reddit started painting the last artist holding his painting of someone holding her/his painting and so on. It’s not that confusing when you have a good ability to visualize things!

People found new ways of adding interesting ideas in this chain like going a little lighter by putting in a cartoon version of these paintings. The innovative ideas have no end! No painting was less than a masterpiece and everyone was having a great time being a part of this chain.

There did come a point in this series when the painting of the swan by Gaddafo’s mom that had started this whole story disappeared somewhere in the chain. But one user by the name SHOWMEWHATYOUGOTTT brought back the authenticity by putting all the light on the swan in his painting and bringing the focus on one thing that deserved it the most.

This is just one instance of the great art and talent that exists in this world. There is a lot more to see!