Talking to citizens of any country about public toilets wouldn’t lead to any pleasant responses. Public toilets are a necessary part of any civilized society to promote health and well being. It is very common to see people, mostly males, transforming the streets into urinals. Revolutionizing, the Nippon foundation has constructed Transparent Toilets in Tokyo. 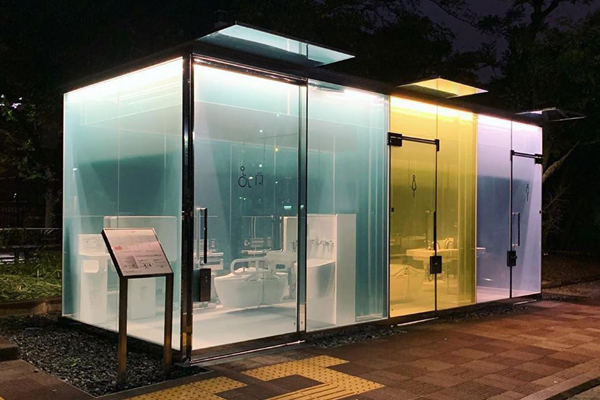 The Nippon Foundation is a private and non-profit grant making organization. It extends its contributions towards enriching culture, enhancing community and working for the better development of the youth.

Public toilets are often related to attributes like stinky, unhygienic and ill kept. This is because of the careless and inconsiderate attitude of people. Whenever a public toilet is used, people tend to leave it in a way that is unbearable to the next coming person. Solving this issue, Tokyo now has Transparent Public Toilets but the first thought that comes to anyone’s mind is that if they are transparent, then how are we going to use them as there would be no privacy provided? But here comes the magic, these toilets turn opaque when the user locks the door providing the secrecy required by any individual.

The concept is technologically sound and also triggers the consciousness of any person using the toilet to use the toilet in a sanitary manner as when the door is unlocked, the doors turns transparent again, presenting the way the user has left the toilet.

This concept also brings into light that technology alone cannot function well, it needs a clear understanding of a basic human brain and how majority of people react in a given situation. To solve issues like that of public toilets it is necessary to understand the psyche or the reaction of people towards an asset they think, they hold no responsibility for or as we can say amenities that are free of cost. The idea of these transparent toilets clearly is a step towards solving these issues.

The toilets are planned in a way by 16 chief designers to make them well equipped for any category of individual’s males, females and even for persons with disabilities of any age thus promoting parity. The Tokyo Toilet Project thus plans to refurbish 17 public toilets in Shibuya, Tokyo with support of the Shibuya City Government. Another interesting fact about these toilets is that they add to the scenic beauty of the parks at night as they glimmer like a lamp.

The Transparent Toilet Project of Tokyo is stimulation for other countries to develop such a system of public utilities that is an apt use of technology and the anima of individuals. The Nippon Foundation strives to build more such public toilets to improve the sanitization of public places. Thus, reducing infections that people might be getting from the usage of public toilets.