Travelling is all about exploring and making some unforgettable memories. Adventurous trips always led to memories that last forever.Similarly, a group of friends experienced something so unique on their trip that they will remember it for the rest of their lives.The group used Tinder to save their lives after they got trapped on a remote cliff edge. 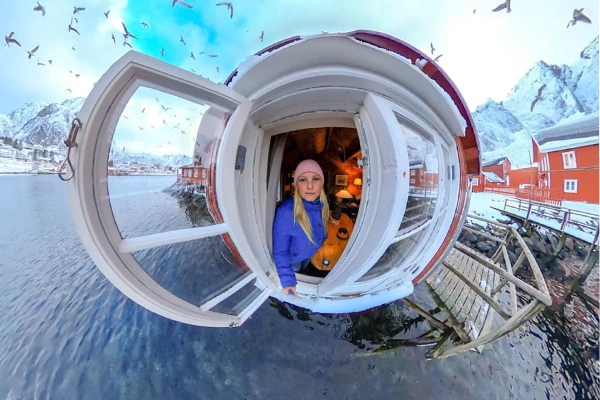 A short while ago, a pro kite surfer and an adventurer Lonia Haeger was travelling through the isolated Norway in a camper van with two of her friends. They became stranded by a deluge of freezing rain, on the side of mountain. As it seemed to be impossible to pass to the next curve on the road which eventually led to ‘ocean and big rocks’, they all stopped their van. They decided to sit and wait for a while for some help. Lonia and her friends were terrified of sliding down the mountain or being hit by another speeding car.

She wrote of the incident on Instagram “Just after 30 minutes driving down of the North Cape, it started raining…the street iced up that we even couldn’t stay on one point!” She added “We stopped in front of a mountain… next to the street [was] just ocean and big rocks and we stopped [sic] exactly behind a curve.”After waiting for some time, they all tried to push the car but soon they realized that the power of just three of them was not enough. So, they decided to find someone that could help.

The picture to our Tinder rescue🚨 (Scroll down to my last post to get to know the story before) While sitting in our camper with the fear that every second the car could slide down the mountain or a car could crash into our camper due to the slippery road, Phil had the weird but actually genius idea to create a tinder account with me and this fluffy cutie 🐶 Literally 5 minutes later I had a match with @stianlauluten 🥳 Another 5 minutes later he came up with his Bulldozer and shaped lines in the ice ❄️ We followed him to the next parking slot and the day after our hero organized tires with spikes! (There wasn’t a mechanic closer than 200km) Now we can continue our road trip to the Lofoten🏔 Tusen takk for your help @stianlauluten 😍 . 📸 @flash_bros_ @kerkamm_campers @hymer @life.of.kurt #snow #norway #roadtrip #tinder @tinder #dog #husky

As it was a remote region, the emergency responders were too far away to help them quickly and even the nearest mechanic was more than 200km away from the place they were stuck in. So,the group decided to download a location-based dating app known as tinder to find anynearby helpful bachelor. They all set up an account for Lonia and to find the match quickly, they uploaded a cute picture of her with her dog. Within five minutes after setting up the profile, she matched with a bearded local guy Stian Lauluten.

She explained the whole situation to Stain in her chat box and the heroic local was quick to offer his help. Stian was a construction worker who showed up with a bulldozer and rescued her and her friends by helping them cut a safe path through the ice. Haeger wrote on social media: “Five minutes later he came up with his bulldozer and shaped lines in the ice”. The surfer continued “We followed him to the next parking lot and the day after our hero organized tires with spikes!”

All because of Stian’s heroic actions, Lonia and her friends continued safely on their adventurous journey. It wasn’t sure whether Stian scored a perfect date or not but the rescue mission was definitely a memorable Tinder experience!