Some people take wedding planning very seriously and some even take the planning to the level that it gets suffocating. This bride was making things over the top when she thought of making her bridesmaid wear color contact lenses. 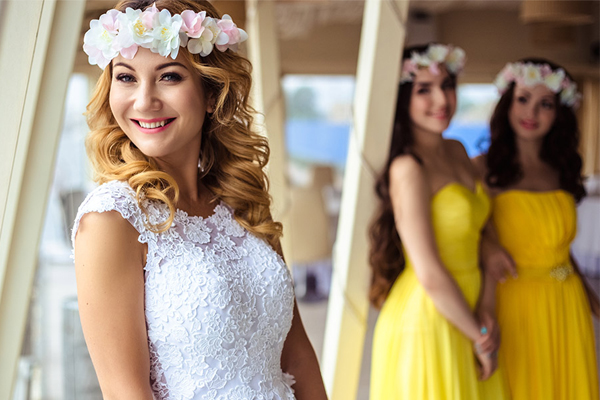 Brides want their wedding to be perfect, they look for perfection in every minute detail. We can’t blame them for being that way as the wedding is their one chance at being the center of attraction. “Saying Yes” is a day that is going to come once in her life.

However, this planning can sometimes go overboard and suffocate people. This bride planned to do the same and took to Facebook to get an opinion if it’s okay to make her wedding such a big deal. The bride posted on Facebook and asked if she could buy her bridesmaids color contacts to match their dresses.

This was obviously going to trigger the audience and they didn’t hold back to give their opinion on such a ridiculous level of planning. She wanted to know if she was asking for too much if she wants to get all of her blue-eyed bridesmaids to nix their natural eye color for the day in order to match her bright yellow dresses.

Her original post read, “How over the top is it to buy my blue-eyed bridesmaids color contacts? I’m offering to let them select any other color… I just think blue eyes would clash, since one of the wedding colors is chartreuse, even a warm amber brown like mine would suffice. I’m NOT afraid of being overshadowed.”

The commenters have answered her clearly and in unanimous. The answer is a mammoth YES.

It is the most normal thing if the bride wants her bridesmaids to have similar dresses but then asking them to match their eye colors is totally bizarre. The bride posted her query in a wedding planning group on Facebook and a fellow group member’s attention was caught by this gem and she posted the screenshot on a wedding bashing group on the same platform.

People were in agreement and said that it was way too extra. One person said that the bride should win the coveted award for biggest bridezilla of all time. Some people have an issue with her scheme too and they want her to get her eyes tested before narrowing down to this color scheme. According to one of the commenters, “Ahem, I think you mean that no eye color goes with chartreuse.”

The best compilation of the craziness was summed up by one comment and it was, “That bride clashes with sense.”