A woman named Jasmine Skinner used her brainy nerves to plan a blasting Christmas for the love of her life. The Newcastle-based woman purchased paint by numbers painting of her boyfriend. She moved ahead by numbers to get the difficult task done. But eventually, she ended up with a mess. It did not resemble the picture and landed in trash-bin. 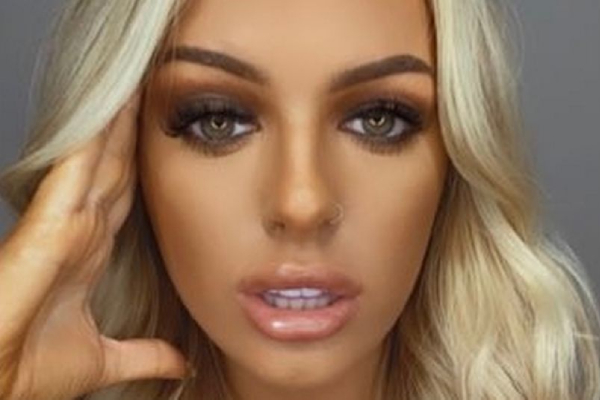 Love and other emotions usher in human actions and moves. They go a long way in shaping the efforts and moments in one’s life. However, fate intervenes time and again to produce an altered result. It soars ahead to upend the expectations, and sometimes resulting in ruins for the worldly souls. But the beauty of life rests in extracting the moments of pleasure and satiation out of the bizarre. A woman named Jasmine Skinner lived one of those moments.

The woman from Newcastle was over the moon while laying a blasting Christmas for her love. She wanted to celebrate it creatively with her mindful ways lacing it. After putting in her efforts, she finally managed to grab a theme for the love of her life. She decided one of his pictures from their trip to be the heart of her Christmas gift.

Moving ahead, she placed an order for the paint by numbers painting of the picture. Satiating her long wait, it arrived. Finally, she settled down to follow the number instruction to paint the picture. Matching the color shade bit by bit, she went ahead to paint the parts of the painting.

But as she proceeded with her painting spree, she realized that it was not coming up what she had aspired. Finally, the painting turned up in contrast to the picture. It did not resemble her boyfriend in any way. The figure in the painting was not reflecting a man in real sense.

Taking a closer look at her work, she ended up grabbing the funny side shining in it. Thus, she decided to share it with the social-media world before bidding goodbye to her efforts. Taking on Twitter, she revealed her Christmas plan. Not just that, she also shared the picture of her boyfriend and her work to let them draw a parallel between them.

Adding to that, she said, “Why have they made his skin so dark”.

Soon, a whirl of fame enveloped the tweet. It ended up with more than 36,800 likes with dozens of comments from social media users.

Not just that, they began to release their laughter and astonishment through their comments.

Taking on that, one of them commented, “Screaming, look at his chin”. Adding to that wave, another user popped in to say, “You should’ve known from the lips alone that the template weren’t the one”.

Another soul took to the platform to say, “I’m howling”. One commentator raised the bar of comparison by bringing the X-Factor judge- Simon Cowell for the figure in the painting. Shedding light on that, the person said, “I can only see Simon Cowell and his pearly whites in the pic”.

She decided to move it to the trash bin instead of getting into a frame to adorn his room. But some of the users advised her to present it as a Christmas gift to her boyfriend.