The best kind of marriages are where love and fun have no bounds, you can love your spouse very dearly and at the same time end up replacing him in the wedding photos with your newborn, Jack Grealish just for fun! 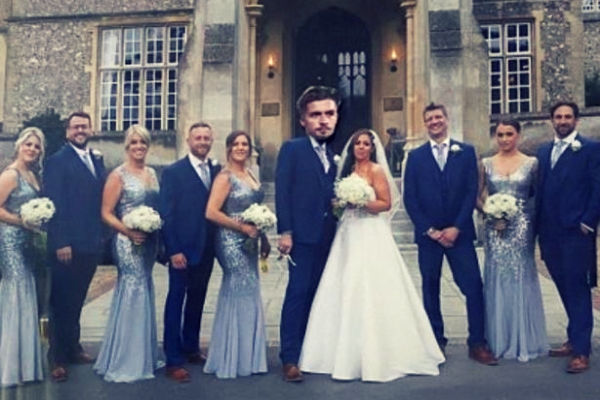 During the Euros 2020, Jack Grealish became a fan favorite, particularly admired by his female fans. Mum Maired Stevens, mother of two, married to Lee was not immune to his charms alike most of us.

Mum developed a crush that she took to the next level. She decided to replace her husband’s face with him in their wedding photos and see how her husband, Lee reacts to it.

She decided to film it for TikTok family as a joke but the video got a lot of attention when her harmless fangirling takes a hilarious turn as nobody notices change in the pictures for days.

After two long days, her kids Maggie, 7 and James,4 finally noticed their mother’s doing. A concerned Maggie inquired if her mother was going to marry that man. At the same time, James told her mom that he didn’t want a new dad.

Marie told her bothered children that they have nothing to worry about and she was just playing around until their daddy notices it. It definitely would have taken some convincing but once Marie told the kids that Jack was rich, that somehow seemed to work and they joined their mother’s side in tricking their dad.

Finally, after three prolonged days of waiting for her husband to notice, Marie finally decided to take matter into her own hands. In the follow-up videos, she told her husband to replace a frame that he had accidentally knocked down some time back.

It was only when Lee went to fix it that he finally noticed the change in the photos and his fall from grace. He got startled and immediately burst into laughter. He tried to scrape Jack’s face off and laughs even more when he could not as the photo was inside the glass frame and he laughed even more.

His wife told him that he had been going on and about for three days in the house without noticing it to which he then commented that he would pay more attention. He then got all pumped up and headed to inspect the rest of the house.

He proceeded to the other photos in the house and found out that all the pictures had been vandalized with that of Jack. He laughed even harder as he passed on to another picture on how foolishly he went on with his daily chores without paying attention to any of that.

The people on TikTok found it hilarious and the video backed about 260,000 views and 27,000 and comments from her fans. However, people found it utmost amusing that Lee could go on for days without even noticing that something was wrong about the man standing next to her wife in his own house.